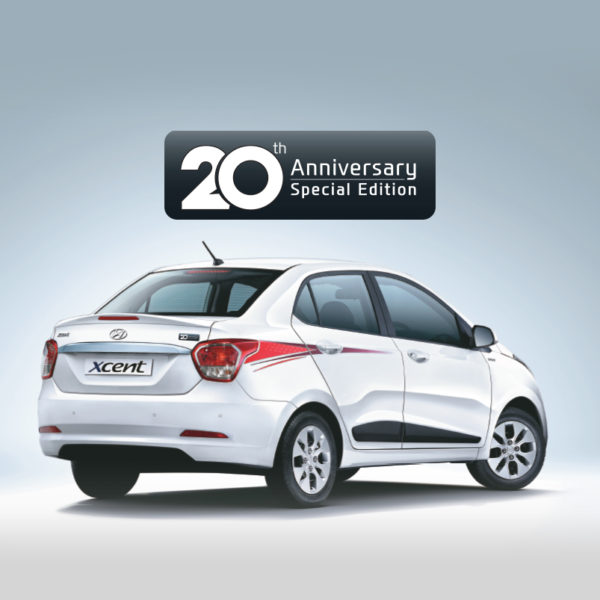 Hyundai Motor India has introduced a special edition of the compact sedan Xcent, commemorating 20 years of Foundation in India. The South Korean car maker completed 2 decades in the Indian market and is now the country’s largest exporter and the second largest car manufacturer today.

Launched two years back ‘Xcent – The Real Family Sedan’ at the 2014 Auto Expo, the compact sedan has become part of over 120,000 families.

The interiors will include 6.2” Touch Screen Audio-Video system and sporty Red & Black seats. The vehicle will be available in “S” Trim with both petrol and diesel variants, in pure white and sleek silver color options. The Hyundai Xcent Special edition is also equipped with driver side airbags and ABS as standard from the base models.

There are no mechanical changes and is offered in both petrol and diesel engine options.

Hyundai will launch the all new Santa Fe in Indian on the 5th of February. The company sent us an official communication of the SUV being launched on the first day of Auto Expo. We […]

Hyundai Creta has just crossed a new milestone with bookings crossing record 1 lakh. The Creta became an instant hit from day 1 since launch and has been able to sell more than 56,000 units […]