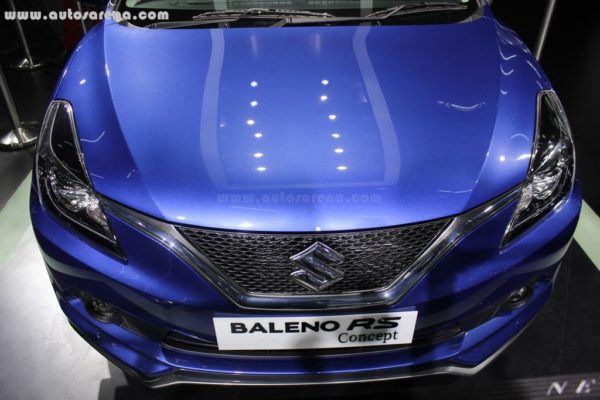 After Ignis, Maruti Suzuki to launch Baleno RS via NEXA.

India’s largest car maker for the first time will launch a  real sports version of the Baleno RS. We call it real, as it will be a Baleno with more power and a a new engine under the hood, not just decals with Sports badge.

The Baleno RS was showcased at the 2016 Auto Expo and will feature the 1.0 BoosterJet code named K10C.

Ahead of the launch in February a TeamBHP member has leaked the spec sheet of the Baleno RS hot hatchback.

The Baleno Racing Sport will be powered by a 1.0-litre BoosterJet engine which was also showcased at the Expo and below video will explain you how the technology works.

The car will have disc brakes at front and rear as compared to front disc only on the standard model. The car will get 16 inch wheels with 195/55 R16 tyres.

Maruti Suzuki has lowered the ground clearance to 114 mm and will also tweak the suspension of the car to handle the increased performance.

Once launched, the Baleno RS will compete with the likes of Abarth Punto and Volkswagen Polo GT TSI.

Expect the pricing to be above Rs. 8 lakhs.

The success of Baleno RS will pave the road for more performance cars from India’s largest car maker. We hope the company brings the Swift RS to India.

A Quick walkaround of the Baleno Racing Sport

Maruti Suzuki is all set to launch the all new S-Cross SUV in the Indian market on the 5th of August. The new S-Cross will be sold exclusively in the new NEXA dealership set-up. Maruti […]

Suzuki launches ‘Made in India’ Baleno in Japan

India made Baleno launched in Japan. Suzuki Motor Corporation, parent company of Maruti Suzuki India Limited launched ‘Made in India’ Baleno in Japan. This is indeed a big occasion to celebrate as it showcases Maruti […]