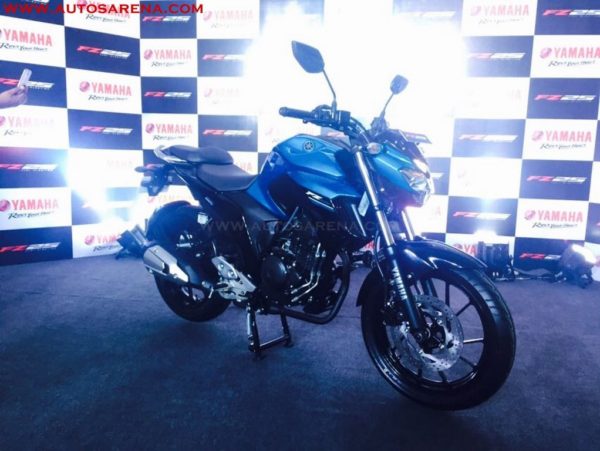 Since its launch in January 2017 the Japanese two wheel maker has managed to sell 11,477 units of the motorcycle in the country as per data released by SIAM.

Sales have been dwindling month on month and the company posted positive sale in the first two months only.

Sales is May 2017 fell to 2,299 units while June posted very low numbers with only 1,999 units sold. One of the reason sales drop could be the anticipation of Goods and Services Tax (GST) and customers must have waited for new prices as it was assumed the prices would drop considerably.

The Yamaha FZ 25 is powered by a 249 cc single cylinder, air-cooled engine mated to a 5-speed gear box.

The engine features Yamaha Blue Core technology develops max power of 20.9hp at 8,000rpm and max torque of 20Nm at 6,000rpm. With company claimed fuel efficiency is 43 kmpl which is decent for bike of this cubic capacity. The model is compliant to BS IV emission standards.

FZ25 features an all-digital LCD instrument cluster, LED headlight (First in the 250cc segment)and tail-light. The bike does not feature ABS and the company also does not offer it as optional. However the bike gets disc brakes at both ends – 282mm front disc and 220mm rear disc brake.

India Yamaha Motor is also working on a faired version of the motorcycle expected to be called the Yamaha Fazer 250 and will launch this year.

Yamaha Fazer 250 is no secret and the motorcycle has been caught testing couple of times on Indian roads.  Northeastern Biking Community shared the images on their Facebook page revealing its design. The body graphics […]

Continuing with its upward growth in the sales, India Yamaha Motor Pvt. Ltd. has registered a growth of 20% in domestic sales during February 2017 as compared to the corresponding period last year. In January […]

Yamaha has priced the FZ25 at Rs 1,19,500 (ex-showroom, Delhi) which his is going to give competition some serious competition such as the KTM Duke 200, TVS Apache RTR 200 and soon to be re-launched […]