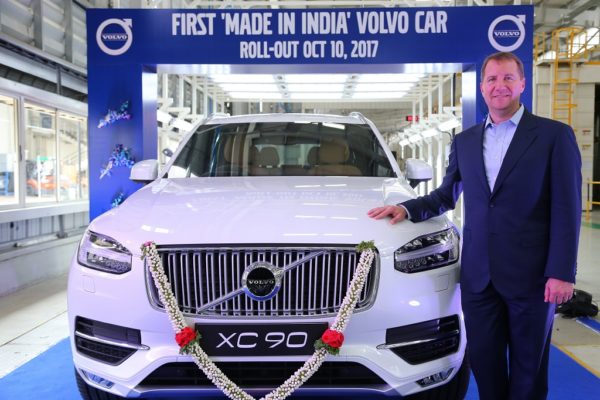 With local assembly operations, Volvo Cars aim to achieve 10% segment share by the end of the decade.

The assembly operations are located near Bengaluru in southern India and focus on models based on Volvo’s SPA modular vehicle architecture. Apart from the XC90 more models on the SPA architecture are slated for local assembly and an announcement on the same will happen at a later stage.

The company will also introduce the new compact cars based on the CMA platform in the Indian market and to keep the price competitive will be assembled in India.

Volvo Cars are working together with Volvo Group India – the truck, bus, construction equipment and Penta engines manufacturer – for its assembly operations and is making use of Volvo Group India’s existing infrastructure and production licenses near Bengaluru.

Volvo currently has a segment share of about 5% and aims to double this by 2020. Volvo Cars in India have had a robust 32% growth in sales volumes in the past two years and the 2017 trend is as per our plan to achieve 2000 cars, which will witness a growth of 25% year-on-year.

Volvo competes with the likes of Audi, BMW, Mercedes-Benz and Jaguar Land Rover in the luxury segment.

“It’s a moment of great pride for all of us at Volvo Cars”, said Charles Frump, the newly appointed Managing Director for Volvo Auto India. “The roll-out of first locally assembled Volvo Car speaks volumes for the company’s commitment to grow further in India. The last three years have been good for us in India and we noticed a positive and encouraging growth in terms of increased segment share, world-class product, and new dealer appointments.With global standards in quality, we are a formidable luxury car company in India and on-track to gain a bigger share of the segment.”

Volvo Auto India, the Swedish car company bagged the two most coveted titles at the ‘NDTV Car and Bike Awards 2016’ night. The XC90 has been awarded as ‘Luxury SUV of the Year’ and V40 […]

The all-new Volvo XC90 has received 266 pre-orders in just two months of it’s unveiling in India. The top-end inscription model has seen high interest with first deliveries of the all-new XC90 to customers will […]