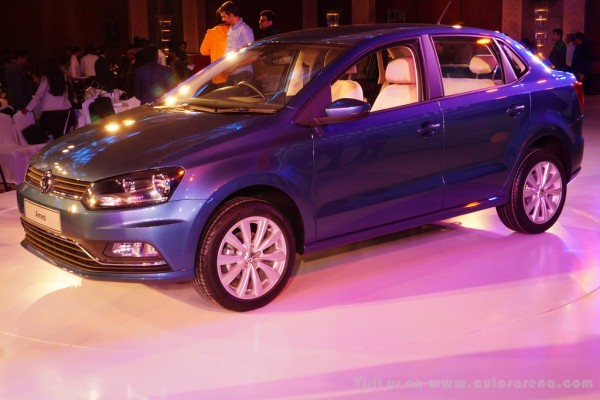 Volkswagen announced its monthly sales performance for November 2016, selling 4,014 units as compared to 1,942 units sold in the corresponding month of the previous year.

Achieving an upward growth curve, VW attributes majority of this growth to increasing sales of the Ameo. The company showcased the made in India, Made for India compact sedan at the 2016 Auto Expo and launched the same mid year. VW recently introduced the diesel variant and DSG Automatic variant which is equipped with an updated diesel engine.

Also, this November, the company marked an important milestone announcing the introduction of ABS and Dual Airbags as standard fitments across all Volkswagen carlines in India. The added safety features have set new benchmarks in safety by adopting global standards for all Volkswagen products in India.

VW today has an enhanced product presence in the Indian car market and consumers will now have a wider choice to select from Volkswagen’s large product portfolio ahead of the upcoming holiday season.

“We have witnessed an encouraging growth with our November sales welcoming new members to the Volkswagen family. Earlier this year, we launched the Ameo and were positive that the vehicle would succeed in drawing car buyers’ attention and it has lived up to our expectations.”

Volkswagen will launch the MY2015 Jetta in the Indian market on 17th of this month. The 2015 Jetta was recently spotted at a dealership and receives subtle updates. The changes being limited and hence cannot […]

Volkswagen to give Vento another update to keep it fresh and going. The C segment which has been facing tough completion from compact SUV and Crossovers will see a lot of activity as all the […]

Volkswagen re-launches iconic Beetle in India, Sold as CBU in select dealers German luxury car maker has re-introduced the iconic Beetle in the Indian market. The Beetle which was first launched as people’s car, the […]