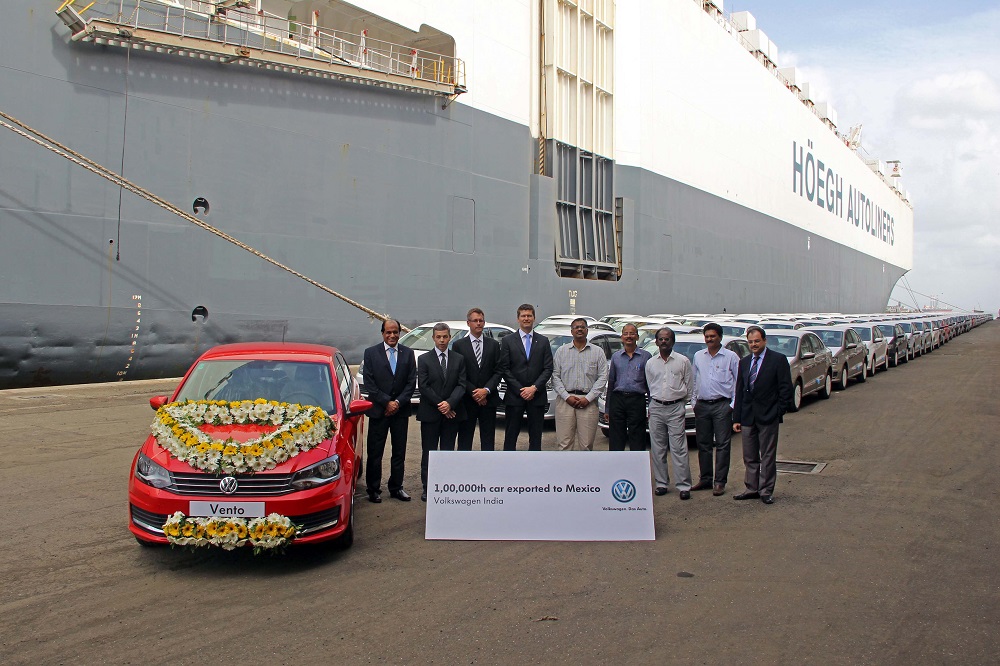 The state-of-the-art production facility of Volkswagen India in Chakan, Pune has achieved this milestone in less than two years after starting export to the North American country. This success highlights the high acceptance and demand of the Indian Volkswagen Vento and Polo in Mexico.

The 1,00,000th export car to Mexico is a red Volkswagen Vento, powered with a 1.6-litre MPI engine from the Mumbai port.

Mexico is one of the largest markets for India in terms of exports and the Vento has been one of the bestselling model in this country for Volkswagen.

VW India started the exporting the Vento in 2013 and the striong demand has helped the company to achieve these feet in a very short timeline. The Vento, built at the Pune Plant, replaced the outgoing Jetta Classico in the Mexican market. After being introduced in the late-2013, the ‘Made in India Vento’ immediately became a popular car in this North American market.

The Vento in Mexico is one of the top 3 best-selling cars in Mexico and also the highest selling Volkswagen car. Nearly every second car produced in the year 2014 at the Volkswagen Pune Plant was shipped to this single largest export market for Volkswagen India.

Volkswagen India exports the VW Polo and Vento in right-hand as well as left-hand drive versions to over 32 countries in Asia, Africa and North America. Starting with the first single export market, South Africa in 2011. VW India rolled out the 5,00,000th car built in India in May 2015.

Volkswagen is all set to launch the Polo facelift on the 16th July. We have got confirmed news from one of our sources and yes, the Polo GT TSI will also be launched with the […]