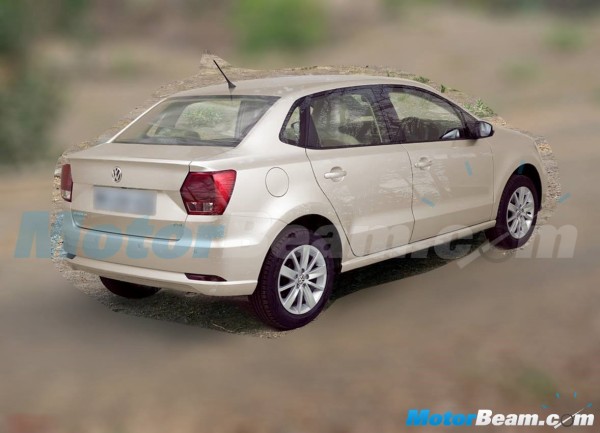 German car maker just unveiled the name of the soon to be launched Ameo compact sedan for the India market. The car has been caught testing numerous times in last few weeks and thanks to Motorbeam for revealing the rear end of the car.

The Ameo compact sedan is going to be slotted between the Polo and Vento and was spotted at a dealer stockyard which is a variant clearly visible from the TDI badge. The Ameo is a shorter version of the Vento sedan and gets a subtle looking rear boot which looks classy unlike the Dzire and Xcent.

The front will borrow design from the Polo with re-styled bumper. Dual tone black and beige interiors will be offered with chrome accents on the dashboard.

Derived from the Latin word ‘Amo’, meaning ‘I love’, the car will see its world premiere at the 13th edition of Delhi Auto Expo and will be on display at the Volkswagen Pavilion during the press & public days of exposition. The company will reveal the car a day prior to the expo on 2nd of February.

The Volkswagen Ameo has been designed specifically for the Indian market, and will be manufactured at the company’s Chakan facility.