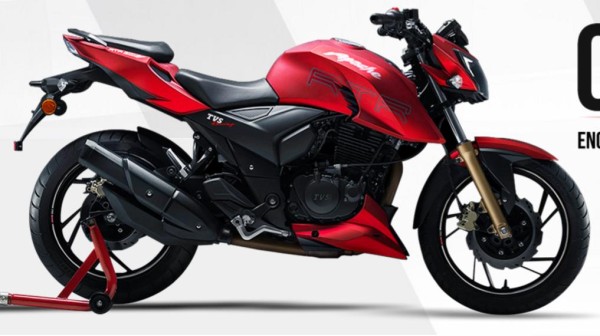 TVS is all set to launch the most awaited bike launch in India this year the Darken inspired TVS Apache RTR 200 4V.

So far spy images have been doing rounds on the internet and leaked images have shown the new the Apache RTR 200 4V in production ready guise.

The headlight will feature a conventional headlamp cluster with halogen illumination along with LED day – time running lights on either side.

Mechanically the TVS RTR 200 4V will feature the same double tube chassis but with better improvements. Power for the new bike will come from a new 200cc engine single cylinder engine as before but with increased power and torque figures and oil – cooler system sourced from BMW. Engine specs are 197.75 cc single-cylinder air-cooled carbureted engine with an oil-cooler, OHC and four-valves, produces 20.23 PS (15.09 KW) at 8,500 rpm and 18.1 Nm at 7,000 rpm, and is mated to a five-speed gearbox.

TVS has confirmed that the engine is likely to meet BS 4 emission norms thanks to the use of dual port and large catalyser. The new Apache 200 will return an improved mileage of 30 kmpl.

Suspension duties will be handled by the monoshock rear suspension system. The braking system will get an improvement as well with 300 mm twin callipers at the front and 230 mm disc at the rear.

When launched in India, the TVS Apache 200 will go head on with the current segment king the KTM Duke 200.

Set for launch simultaneously in India and Indonesia, the Apache RTR 200 4V will be offered in six colours – Black, Grey, Matte Black, White, Red and Yellow.

TVS has launched the Jupiter ZX variant in the Indian market. TVS launched a limited edition Jupiter a few weeks back and seems to have christened this variant into ZX and could be sold as […]