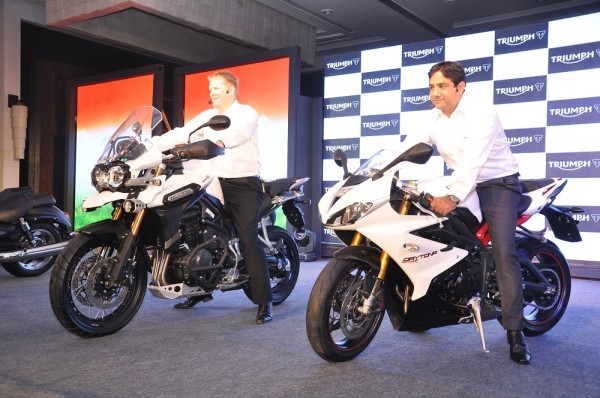 Iconic British motorcycle brand, Triumph Motorcycles, made its Indian debut and introduced 10 models. Triumph made their entry in India in 2012 at the Auto Expo and had unveiled their line-up which included: Classics, Roadsters, Adventure, Cruisers and Supersports. But due to some reasons, the company postponed their entry in the Indian market.

Today, Triumph has announced their plans for the Indian market, with the launch of 10 models and will introduced the products via the CBU and CKD route. Triumph will assemble six products to start with at their new facility at Manesar. The line-up, will include the Iconic Bonneville and Bonneville T100, the legendary Speed Triple, the largest production motorcycle the Rocket III Roadster, the class leading Street Triple, the cool café racer the Thruxton, the go anywhere Tiger 800 XC and Tiger Explorer, the stripped back and black Thunderbird Storm and the king of supersports bikes, the Daytona 675R.

Triumph will be assemble the Bonneville, Bonneville T100, Daytona 675R, Street Triple , Speed Triple and Thruxton in India at the (CKD) assembly facility. The rest of the bikes, Rocket III Roadster, Tiger Explorer, Tiger 800 XC and Thunderbird Storm will be imported into India as CBU’s.

Triumph’s exclusive dealerships will be operational very shortly in major cities like Delhi, Mumbai, Bangalore and Hyderabad to start with. Over the next few months there will be many more dealerships that will open up across India. Triumph will ensure that a complete biking experience will now be available to Indian riders and will also offer authentic merchandise and accessories.

Triumph Motorcycles announced the launch of its all new Tiger 800 XCA baby adventure motorcycle. The Tiger 800 XCA is launched to attract customers who are looking for pure adventure and seek to unknown areas. […]

Triumph Motorcycles, the 114 year old iconic British Motorcycle brand reignited the fervour & passion for riding by being a part of MotoDay 2016 in association with MotoDreams at Lavasa near Pune. Touted as an […]

It is a triple for Triumph Motorcycles India