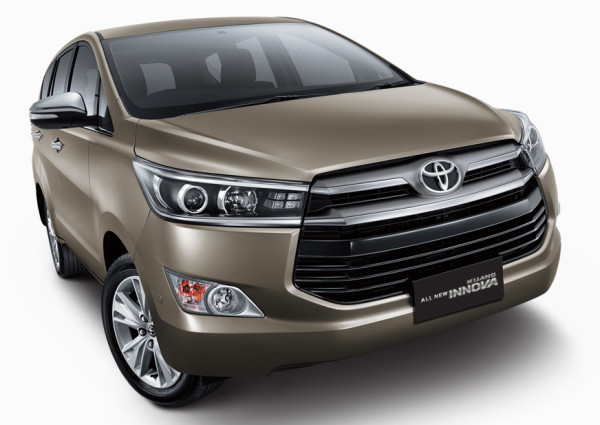 New Toyota Innova to be unveiled at 2016 Auto Expo, launch could happen in first quarter of FY2016

All new Toyota Innova will be first unveiled to the Indian market at the 2016 Auto Expo and like all the fans, we too are quite eager to see this MPV which held its throne ever since it was launched.

The Innova has been a favourite choice for fleet customers and also has a good brand equity among personal car buyers.

Toyota first launched the Innova in 2004 which was then launched as a replacement for the popular Quails. The MPV was an instant hit much due to the aggressive pricing, ability to seat seven people in comfort and premium feel, Toyota also upped the style quotient and premium levels in the Innova with the recent facelifts which saw a new grille, alloys and bumpers. The pricing of the Innova gradually increased from Rs. 8 lakhs to almost Rs. 18 lakhs for the top end Z variant.

However over the years nothing much has changed about the Innova’s basic shape accept for minor facelifts and the MPV slowly started to show its age specially amid increasing competition lower priced MPVs and SUVs After serving the market for 11 years. Toyota is all set to unveil the new Innova at the Delhi Auto Expo.

Based on the New Hilux platform, the New Innova retains the basic MPV shape of the current Innova but the design is revolutionary. There are new double barrel projector headlamps which are flanked by the large hexagonal front grille. The side profile gets restyled glass area with kinks sharply upwards after the rear doors.

The rear gets a redesigned tail gate with inverted L shaped tail lamps with LED lights and a new first in segment Smart close door which automatically closes the tail gate door of the Innova once you finished with your work in the boot.

The interiors are a very big change from the existing Innova with dual tone treatment and good amount of faux aluminium giving it a very premium appeal and top end variants should get wood grain treatment and Leather upholstery as well.

Toyota is expected to pack in plenty of equipment ranging from dual zone climate control, LED mood lighting, cooled glove box, all power up and down power windows, and 7.0 inch touch screen infotainment system on all variants. While the top end Q variant will benefit from a larger 8.0 inch touch screen with HDMi support and in car wifi and smart key, entry, 17 inch Alloy rims, shark fin antenna and fog lamps. However these features are from the Indonesian spec model, we will have to wait and see what features the Indian Innova gets.

Power for the New Innova comes from brand new GD series family of engines which replace the older KD series of engines internationally.  A brand new 147 bhp 2.4 litre diesel engine mated to a 5speed manual or 6 speed automatic transmission options for both engines. Toyota is also planning a new petrol engine line – up to power the new Innova as the Delhi ban on diesel engines above 2000cc in Delhi and NCR regions will not be able to register their cars.

Toyota has also paid deep attention to the safety levels in the New Innova. The car comes with new ladder frame chassis has been reinforced for extra strength and rigidity, All variants of the  new Innova get ABS, EBD and three airbags as standard, while the top end Q variant packs in Vehicle stability control, Hill start assist, and a pair of side and curtain airbags  to the list.

The new model has gone several notches higher with a fresh new design, powerful new engines, premium new interiors that are packed with features many of which are first in class and not yet seen on a passenger vehicle of this class yet.

Toyota’s Innova has made segment of its own and has been a market leader ever since its launch. The new Innova is going to take this bar further and we can expect the top variants to be priced close to Rs. 20 lakhs on road.

Crossovers are becoming increasingly popular with car buyers all over the world for their practicality and style quotient. In the Indian context, Compact Crossovers based on hatchbacks are gaining lot of interest as they offer […]

Toyota Kirloskar Motor has announced a price hike by up to 3% effective from January 01, 2017. The decision is in line with the general industry trend prompted by increasing cost of manufacturing vehicles and […]