Rush could be the model from Toyota to enter the competitive compact SUV segment in India.

Toyota Kirloskar is all set to enter the compact SUV segment with the Rush SUV in the Indian market. The compact SUV segment under 4 metres and just a little more than 4 metres has seen a massive boom in the last few years with Ford EcoSport taking the lead. This was then followed by the Renualt Duster, Nissan Terrano and Hyundai Creta which has set a new benchmark all together.

Toyota is working on plans to enter this segment and may bring in the Rush SUV sometime next year. The Rush  will most likely be showcased at the 2016 Auto Expo where the company could study on the inputs and customer preferences to further localise the product to suit Indian needs.

The Rush is not a new model and has been sold in various other markets outside India. The SUV has been sold as a Toyota model in some countries and as Daihatsu Terios in few markets. The First generation (J100) was sold as Premier Rio from Premier Automobiles Limited, which is a re-badged Zotye Nomad I.

The Rush in India could be offered with 1.5 litre petrol and 1.4 litre diesel engine options, The 1.5 petrol with Variable Valve Timing with Intelligence (VVT-i) produces 110 PS of max power. The diesel 1.4 with variable geometry turbo capable of producing 90 PS of max power will mostly likely be offered. The same engine is also available on the Corolla Altis. Transmission options include a 5 speed manual and 4-speed Automatic, Gate Shifter gear box may be offered for the Indian market. 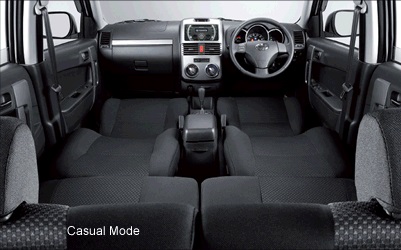 The Rush on the front has a bold and aggressive design thanks to the carbon fibre finishing and 2-tone effect of the bumper, Projector Headlamps with LED Positioning Light. The rear design complements the front with C-Channel shaped LED tail lamps.

On the side the Rush gets large 16″ polished alloy rims with Silver & Black tone finishing which look quite promising and roof rails to complete the SUV appeal.

Safety features like Anti-Lock Braking System, Electronic Brake-force Distribution and Dual Front Airbags could be offered as standard on all variants.

Interiors get black treatment and the Indian version could get beige as an option. A 2-DIN Audio System with Steering Switch Control, 6-speaker audio system which is equipped with a tuner, MP3 player, CD player, USB, AUX-Jack, iPod and Bluetooth® compatibilities.

A unique to this segment could be dual blower air conditioning system.

The Rush is available in two seating configurations – five and seven and we expect the later to be offered in India. The five could be offered as a luxury option. The seven seat option comes with an easy one-touch tumble as seen in Honda’s Mobilio MPV.

The Toyota badge does command a premium and the Japanese company could most likely price the Rush in the Rs. 8-10 lakhs price segment.

Volkswagen has announced the global unveiling of the India specific compact sedan at the 2016 Auto Expo. The compact sedan codename: VW ICS, is rumoured to be known as Ameo and has been caught testing […]