Japanese car maker was the first to introduce hybrid cars commercially in the world back in the year 1997. Almost 18 years later the company is proud to announce 8 million sales milestone. The new milestone has been reached in a record 10 months. In December 2014 Toyota crossed the 7 million sales mark.

Toyota sells over 30 hybrid passenger car models and one plug-in hybrid model in more than 90 markets globally. The Indian arm, Toyota Kirloskar Motors sells 2 hybrid models the Camry Hybrid and Prius. The Camry Hybrid has been a sales success with 80% sales from this model as compared to its petrol counterpart. 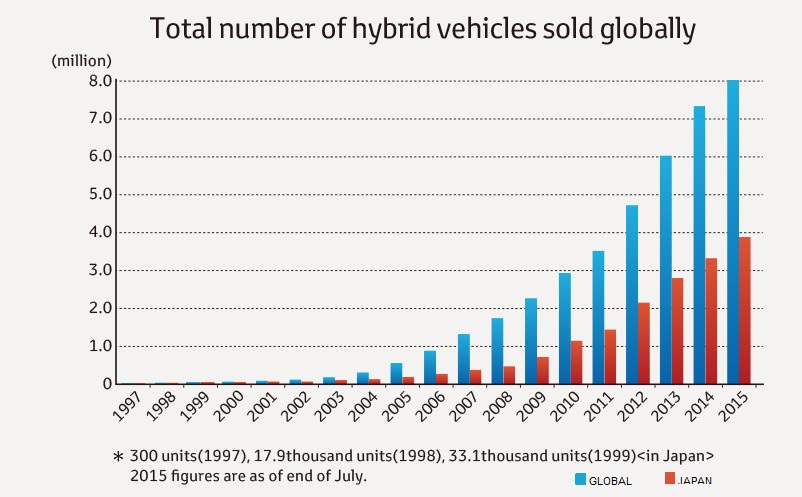 According to Toyota the hybrid vehicles have resulted in approximately 58 million fewer tons of CO2 emissions than would have been emitted by gasoline-powered vehicles of similar size and driving performance.

Toyota also estimates that its hybrid vehicles have saved approximately 22 million kiloliters of petrol compared to the amount used by petrol-powered vehicles of similar sizes. In the Indian context 58 million fewer tons of CO2 emissions is about 3.55% of total CO2 emissions in India. 22 million kiloliters of gasoline saved compared to the amount used by gasoline-powered vehicles of similar sizes, is around 13.3% of India’s annual Oil import.

Toyota’s hybrid system uniquely combines electric motor with petrol engine to create one of the world’s most efficient vehicles and also offers high performance. The Hybrid Synergy Drive® available on the Camry Hybrid & Prius is smart technology, telling the car when to switch between petrol and electric power and when to combine both for maximum efficiency.

Read our review on the Camry Hybrid

Toyota Platinum Etios and refreshed Etios Liva gets major styling updates with more safety on board. Japanese automaker Toyota has introduced the refreshed Etios series in the Indian market and this time the cars get […]

The Toyota Innova Crysta will complete one year this year and the Japanese car maker will introduce a new sporty looking variant of the Innova Crysta – Innova Crysta Touring Sport. The comes as a […]