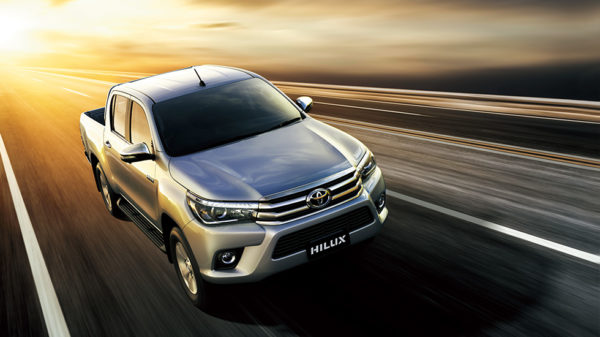 According to the latest news in the Automotive world, Toyota are searching for a new way to rival Ford this year. While the Toyota Hilux may have already earned a reputation as one of the strongest, and most reliable off-road vehicles in the world, the truck has faced some pretty steady competition from Ford, who recently revealed their incredible “Ford Raptor”.

The Raptor will hit the market in Australia during 2018, before a US-Spec model arrives in the States during 2019. It’s built on the successful F-150 Raptor design, and sources say that it will be powered by nothing less than a 2-litre turbo diesel engine, capable of up to 350 lb-ft of torque.

Competing with Ford: The New Toyota

With up to 200 horsepower underneath the hood, it makes sense that the Ford Ranger Raptor could become one of the most competitive off-road trucks on the market in the new year. That would be bad news for Toyota, who have prided themselves on maintaining the top spot for rugged performance.

Unfortunately, at this stage, Toyota simply don’t have a Hilux truck that’s capable of competing with the Ford Raptor. However, sources suggest that this could soon change. In fact, the Marketing and Sales expert behind the Toyota team announced at the Tokyo Motor Show that the brand will be looking into introducing a “hardcore” Hilux as part of an update to the current model range.

In other words, it might be time to start stocking up on all info about fibreglass canopies that you can find, capable of fitting with the Hilux. Sean Hanley suggested that Toyota are eager to fill the gap in the Ute market that exists around off-road work vehicles.

If Toyota do manage to pull off a hardcore Hilux, then they might not have to hand their top-spot ranking over to Ford just yet. However, we’ll have to wait and see exactly what the company can accomplish with their updates. After all, they have some pretty big benchmarks to bypass if they want to maintain control over the marketplace.

For now, Toyota seem to be relatively confident about their ability to succeed in the Ute marketplace. The Sales and Marketing executive, Sean Hanley said that the brand is hoping to finish off the year with the number-one selling car, and continue to out-sell their competitors in 2018 too.

So far, Toyota have some pretty impressive trucks on the roads. For instance, the Australian Hilux range comes in three distinct variants, including the “WorkMate” option, the “SR”, and the “SR5”. However, none of these models can currently be purchased with anything higher than a 2.8-litre diesel engine. Even the range-topping package that comes with the SR5 doesn’t feature a super-charged option.

Though Toyota have filled some market gaps with their TRD vehicles, they know that they’re going to have to pull out all the stops if they want to make sure that they have the number-one selling car in the country in coming years. As the off-road vehicle segment becomes increasingly popular, and workers search for more abilities in their work vehicles, Toyota now have more competition than ever before.

Currently, there are no available details about the powertrains or features that might be available in a “hardcore” Hilux model. However, there’s a good chance that if more information does arise, it will come from the Toyota Gazoo Racing division, where the company builds their most competitive machines.