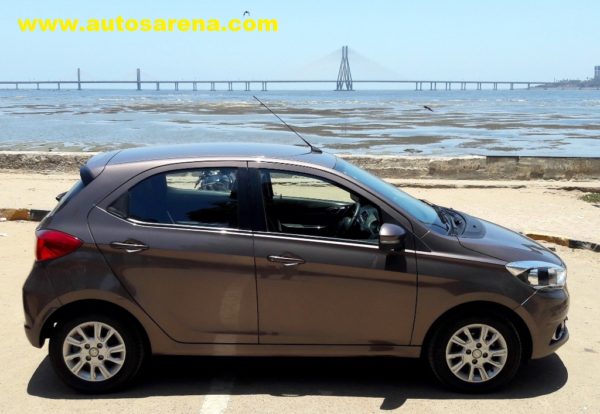 We couldn’t resist borrowing the Diesel avataar of the Tiago after driving the petrol for a couple of days.  Tiago’s strength lies in its stylish design, well appointed cabin and comfortable ride. But what we particularly wanted to check in the diesel was its fuel efficiency as the petrol surprised us with its excellent fuel economy in the city as well as on the highway.

This time Tata offered us a Tiago Diesel in Expresso Brown shade which had clocked 8417 kms and was more than a year old. While the Sunburst Orange which we reviewed earlier looked flamboyant, this one had an understated charm. Visually, the Diesel and Petrol models are identical. There is no dissimilarity in the way they look on the outside or inside the cabin. The primary difference is under the hood and in the driving experience.

Since we have already discussed at length about the exterior styling, cabin features, etc in our petrol review (LINK: http://www.autosarena.com/tata-tiago-review-funtastico/), lets proceed straight to  ‘Engine & Performance.’

The Tiago Diesel is powered by a 1.05L, 3 cylinder Revotorq engine that develops 70 PS of power and 140 Nm of peak torque. The engine comes to life with a mild diesel clatter and as you drive off you realize that the clutch is slightly heavier than the petrol. The steering is light, gear throws are precise and the brakes are good too. However, a minor issue we faced multiple times was in engaging the car into reverse gear. The slotting wasn’t as accurate as the rest of the gears.

At city speeds, the cabin is fairly silent with no engine noise or road noise filtering inside. The car feels adequately powered even with 4 occupants on board. Mild vibrations can be felt on the gear lever and steering wheel as you drive around. But its compact dimensions coupled with light controls make this car an ideal city commuter.

While we had completely avoided the ECO mode in the petrol model, we were pretty comfortable driving around with ECO mode switched on in the diesel variant. There was negligible power loss and we experienced a gradual increase in fuel efficiency too.

On the highway, the Tiago Diesel is a better performer than its petrol sibling. Power delivery is linear and though the car takes a while to reach a ton, it doesn’t feel out of breath while doing triple digit speeds. The Tiago Diesel is at ease while cruising at 120/130 kmph. With a kerb weight of 1030 kgs, the car feels stable at highway speeds unlike the Marutis and Hyundais which get tossed around. The steering feedback is decent and brakes too are progressive just as in the petrol variant. Suspension feels stiffer in the diesel and soaks in most bumps without any fuss even at high speeds. The car doesn’t lose its composure while cornering or upon slamming the brakes to bring it to a complete halt. Overall, the Tiago drives and behaves like a much bigger car. Additionally, with its solid build, the Tiago feels much safer when compared to its tinny counterparts.

On the downside, the Tiago Diesel gets noisy when driven at high speeds. Besides engine noise and road noise, the blower inside the cabin gets noisy at full blast. While in the petrol Tiago we seldom operated the blower speed beyond 1 (min) or 2, in the Diesel we were constantly setting the blower speed to 3 or 4 (max) as the AC was noticeably weaker. And since the cooling wasn’t as good as in the Petrol, we were often fiddling with the AC vents to direct the air throw towards ourselves.

Fuel economy is another talking point of the Tiago siblings. The MID displayed a FE of 16/17 kmpl in rush hour traffic and 18/19 during non-peak hours. Similarly, on our 250 km highway trip, the FE rose to 21/22+ kmpl. The AC was continuously switched on during our drives and we never drove the car with the intent of extracting maximum mileage. While we would have been happier with slightly higher FE on the highway, we were completely satisfied with its FE in city driving conditions.

Tata Motors team at the Sanand facility celebrated the roll-out of the 100,000th Tata TIAGO, the most popular hatchback from Tata Motors. The Tiago has been a very successful product from Tata Motors and averages […]

With success of Tiago, Tata wants to further promote the up the ante with Tiago Sport. Tata Motors has been working on several new models to revive its brand image in the market. At the 2016 Auto […]