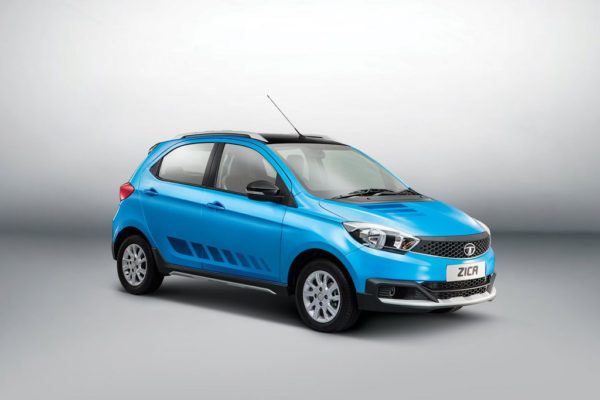 The company has started testing the Tata Tiago Aktiv. The crossover was showcased during the Auto-expo earlier this year.

Tata has really set the ball rolling in terms of its launches in 2016. The most promising of all those launches was the Tata Tiago which has been clocking high amount of interest among the Indian buyers.

This very interest in Tiago has motivated the company to begin with testing the crossover for the hatch.

The Tata Tiago Aktiv was spied testing in Maharashtra and is expected to hit the assembly line soon. Tata was initially planning to provide the crossover kit as optional on the regular Tiago.

The initial impressions though don’t indicate any significant change in the basic platform for the vehicle. The ride-height also is observed to be the same.

The major changes though are expected to be cosmetic in nature. This can be regarded from the prototype exhibited during the Auto-expo earlier this year.

The changes include an aggressive front bumper finished in matte black, scuff plates which will give it a crossover appeal. New alloy-wheels comparatively bigger in size to the sedan and roof rails were few more noticeable changes.

Currently the Activ kit also will be available for up-gradation from the regular hatch. This can be availed from the Tata Motors’ personalisation studio for about Rs. 30,000. The Tata Tiago Aktiv crossover will slightly cost more. Even then the Tata Tiago Aktiv makes for a good proposition.

The company has decided to carry out the production in limited number of batches. The customer feedback will be analysed and then will be put into mass production if need be.

This model will compete with the upcoming Chevrolet Beat Activ.

Mystery Truck caught testing, is it the new Tata 1109?

The Pune –Bangalore highway is where one has to spot a vehicle being tested. Be it an upcoming car, SUV, LCV or truck. This time we spotted a Mystery Truck caught testing which was heavily […]

With the arrival of festive celebrations, Tata Motors announced the launch of Hexa XM+, a new variant of its lifestyle SUV. Priced at Rs.15.27 lakhs (ex-showroom Delhi), the new trim will offer as many as 16 […]