Tata Motors have introduced a totally revamped Nano Genx, now with a host of new features including automatic transmission, openable boot, bigger fuel tank and a nice front face. I had the chance to drive it around in Pune earlier this month and this post provides you a quick review of what to expect from the latest Nano. 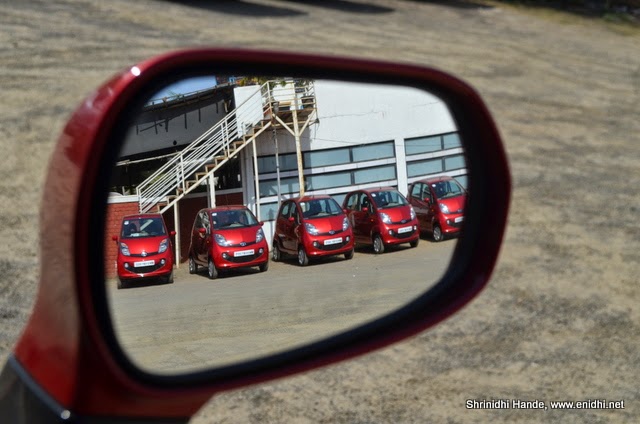 Improvement 1:  Easy Shift (AMT-Automated Manual Transmission option): Easy shift is a 5 speed automated manual transmission set up on top of existing 4 speed manual gearbox and is the primary selling proposition on the new Nano Genx. Convenient for city usage and for those who prefer automatic- Nano AMT is now India’s most affordable automatic. For the driving enthusiast in you, manual mode would still be better, as automatics are little slower to respond than corresponding manual transmission in all cars, on an already small engine (We hardly reached fifth gear during the drive and we couldn’t reach designated top speed as we drove in a convoy). But Nano’s target customers are city users, including women, who need an easy to operate car, reasonably priced and not necessarily the most sportive, powerful option in town, So with that perspective, Automatic Nano is spot on. 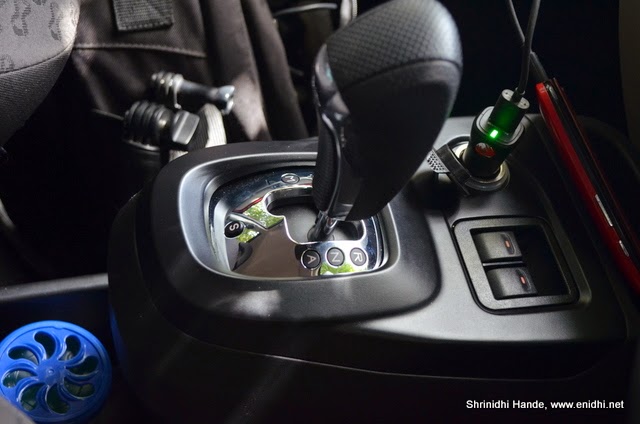 Creep mode helps easy crawling in bumper to bumper traffic. There is a sports mode as well, but that is added more as a marketing gimmick. The delta is very hard to notice. Nano’s AMT is easier to operate than that of its rivals- Maruti. In Alto gear lever should be moved left, right,up and down. In Nano it is only up (Reverse) and down (for drive).

Improvement 2. Refined front look with infiniti motif grille that looks like a smiling face. Smoked headlamps with Nano engraved on the side, bright round fog lamps. What you see in below pictures is a new colour on offer- Sangria Red. Persian Rose is the other new colour. Clear lens indicator with orange bulb gels well with rest of the theme. 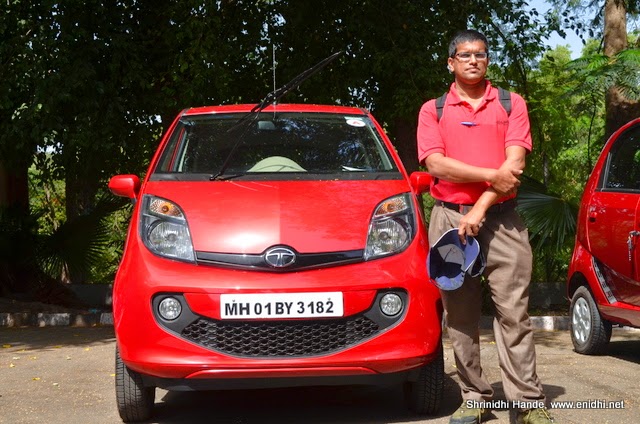 Improvement 3: Increased fuel tank size. Now holds 24 litres as against previous 15. Can give you close to 500kms range on full tank. 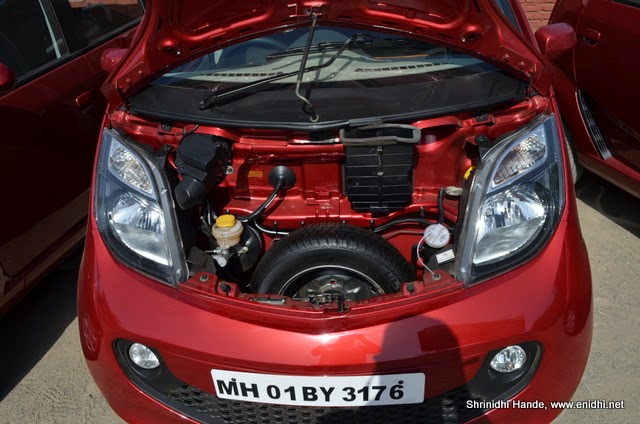 Improvement 4: Enhanced interiors: Nano embroidered brown infinium seats with orange lining, ebony and luxurious latte combination interiors with satin cappuccino finish on centre console- this full and proper technical name sounds very complex, but simply put, Nano’s interiors in top spec variant will now feel a lot more upmarket and stylish than the competition. Instrument cluster has dual trip meter, distance to empty, instantaneous mileage and other regular feature. Cluster continues to be at the centre (unlike in Vista D90 and bolt where they moved it from centre to right after customer feedback)

Nano’s Steering wheel now looks and feels similar to other Tata Cars and is not a tiny one as earlier. May be in next facelift we will get audio control on the steering wheel (space provision is already there)

Below: Current Nano interior for comparison 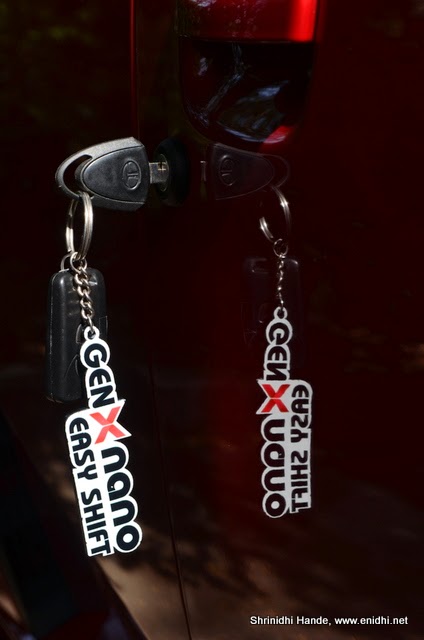 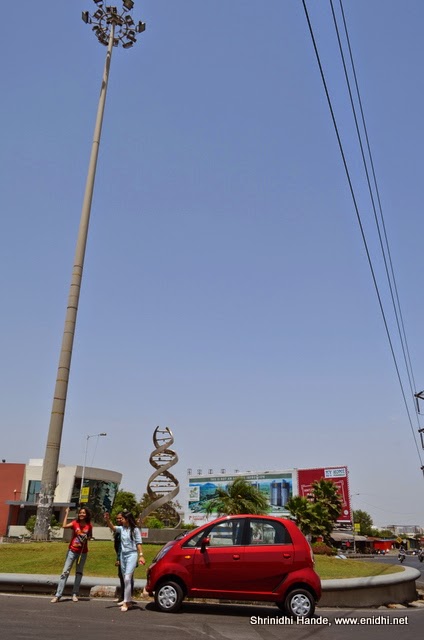 Hydraulic power steerings in regular cars draw their power from engines. Nano uses an electric one, powered by a separate motor. Largely same one as in Twist, steering firms up as speed increases, has active return function – returns to straight position after a sharp turn (won’t work in first few mins) and together gives a 4 meter turning radius. Because Nano’s wheels are at extreme corners, it adds to convenience while turning in space constrained positions. You can rotate the steering wheel with your finger tip.

Improvement 6: . Open-able boot: Provides 110 litre space in manual versions and 94 litres in AMT variant. This space is on top of the engine compartment, so avoid placing very heavy baggage and makes Nano a bit more practical. 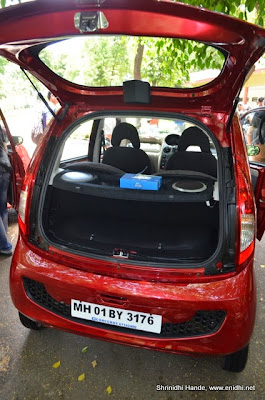 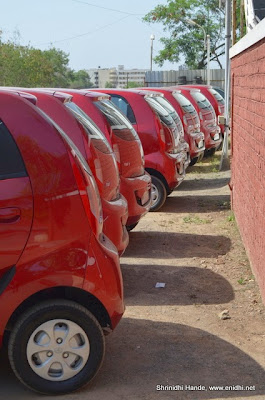 Earlier Nano had one single shell with 4 doors. Now with fifth door (rear boot lid), more structural support is added to ensure safety. Impact cushioning crumple zone, reinforced body panels with intrusion beams on the doors and anti roll-bar make Nano meet all Indian safety norms. No Airbags yet. 180mm ground clearance is best in class. Because Nano is tall, it has move volume of space inside than its rivals, despite having smaller length and width. 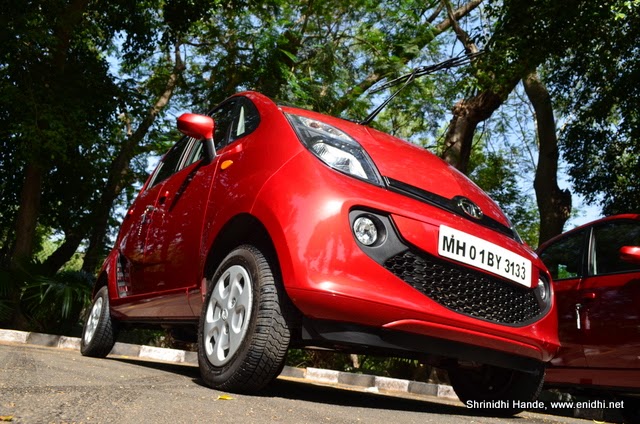 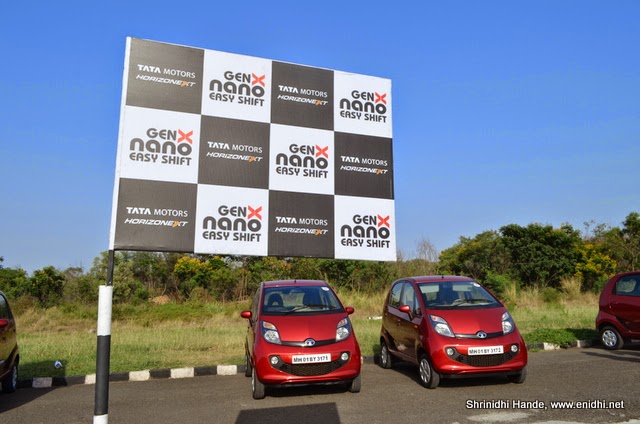 Enough theory. Now the drive- we had a short trial run to familiarize ourselves with the car. Creep function works very well for stop and move situation. But people should be careful about the feature that releasing brake makes the car go forward. We drove around in Pune city and it was sheer fun. Steering can be controlled at fingertip, noise levels are significantly down and AC was effective. Overall Nano is much more refined and matured in its current avatar. 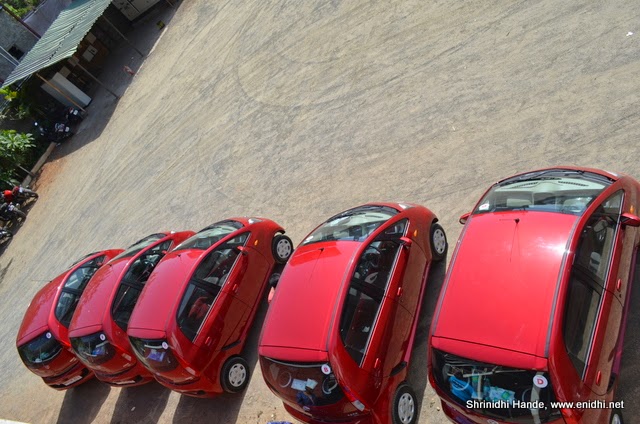 Nano’s lest price variant has 1.99 laks ex showroom price in Delhi, but Nano AMT”s top spec variant will cost about 3.7 lakhs on road in most states. That is still Rs 1 lakh cheaper than the closest rival- Alto K10 AMT.

While rivals have slightly more power, more boot space and wider/longer body, Nano will save you a lakh or more, gives you a more premium interior, better vertical space, ground clearance and AC. It looks very cute, grabs eye balls and with Tata’s recent positioning as smart city car, new Nano is feature rich and more inspiring than ever.

If you’ve been a Nano fan and excited about the AMT option, go book. If you’re looking for the most affordable automatic in country, then here it is. Bookings already open at Tata showrooms. But just be cautious to keep your expectations right. It is an affordable and smart city car and not a powerful, sporty highway car. The ever continuing evolution of Nano proves Tata’s commitment to this brand and with their strong dealer network and revamped dealership experience, after sales service is going to be much better than earlier. Overall, Tatas have a tempting package in the new Nano Twist XTA (that is what the rear badge of Nano Genx Easy Shift says).

The Kite 5 Sedan could be called Viago or Altigo. Tata Motors will launch the Kite 5 sedan in India in April 2017. As per our close sources the company has started work on the commercial […]

The slowdown in the automotive sector is adveserly affecting the sales figures of most industry players. Tata Motors Commercial and Passenger Vehicles Business witnessed a drop of 26% in the month of May 2019. The […]