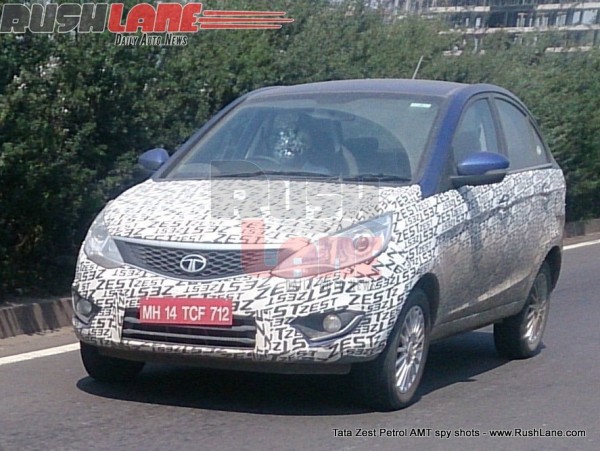 Tata Motors launched the Zest compact sedan in August but the company continues to test the car. That brings some curiosity to our minds as to what new features could be added to the Zest which requires testing the car in the real conditions. The Zest promises a lot of segment first features, a new turbo petrol engine and a first AMT automatic transmission on the diesel.

A reader from Rushlane, managed to spot the Zest in a camouflaged state. Upon following the car he noticed the Zest with AMT option and when enquired with the driver, he replied it was a petrol engine. 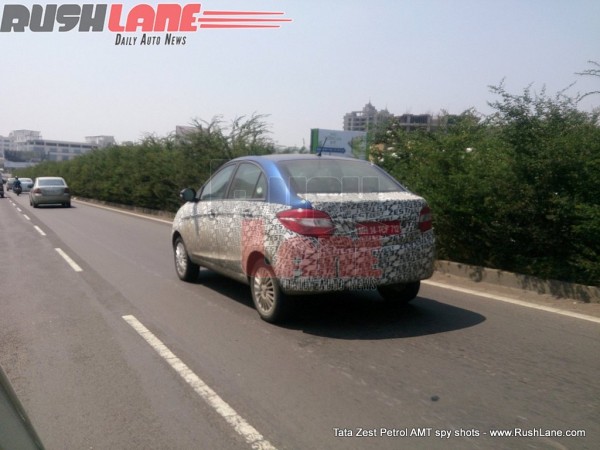 With diesel prices almost matching up with petrol, the numbers are showing an increasing preference to petrol cars. With AMT option available on the diesel engine, Tata Motors may also want to offer customers an option of petrol AMT.

The Zest at launch had received around 10,000 bookings and the AMT variant had a waiting period of 3 months. Customers are favoring fuel efficient automatics mainly in metros due to the increased convenience they offer.

The Zest competes with Maruti Swift Dzire, Hyundai Xcent and Honda Amaze. All these cars are available with an automatic on the petrol engines. Zest with AMT definitely makes a logical decision and will only help to increase the numbers.

Tata Motors is also gearing to launch the Bolt hatch which will be launched officially in January 2015.

Tata Motors as launched a special edition the Zest compact sedan to celebrate the 1st anniversary.  The Zest Special anniversary edition comes with 10 new attractive features and is built on XMS variant. The Zest […]

Tata Zest with dual airbags gets 4 stars in Global NCAP. As a part of the SaferCarsForIndia progema, Global NCAP has crash tested the Tata Zest. The company tested two versions of the compact sedan, […]