Tata Hexa is supposedly to take over as the flagship model. Test mule of base variant caught testing.

The Hexa is Tata’s answer to the ever growing UV segment in India. The Hexa will come in as a replacement to Tata Aria which didn’t quite make the cash registers ringing. Tata Motors has been testing the Hexa and a convoy of vehicles were seen and at another location the base variant of the upcoming flagship vehicle was caught testing albeit in camouflaged avatar.

The Hexa has been developed by Tata in close association with UK design team to give it an up-market feel. The vehicle though seems as a evolution over the Tata Aria with most of its design attributes being similar. First unveiled at 2015 Geneva Motor as a concept, the 6 seater Hexa caught the eyes of many.

Tata Motors showcased the Hexa and Hexa Stuff 2016 Auto-expo, the vehicle has been one of the most talked about cars from the Indian company.

Tata though hasn’t been hurried by these expectations. Instead the company is fine-tuning every aspect of the car to be a class-beater. The recently spotted test mule seems to be the finalized product of the Hexa. 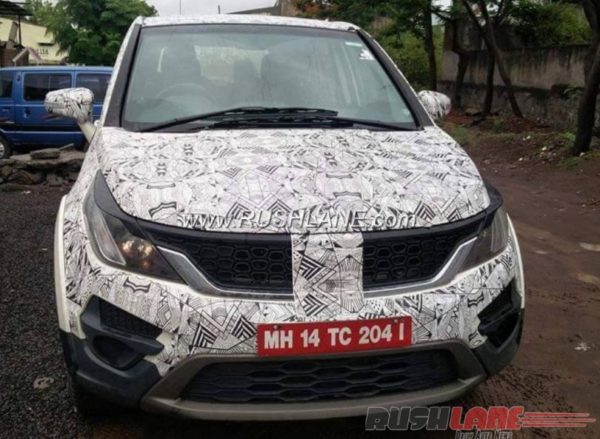 The spied vehicle though is devoid of fog-lamps and bumper mounted LED strips which can ascertain that it is the base variant. The base variant might come in for a lot of demand by the Taxi buyers when launched considering how aggressively the vehicle will be priced.

The vehicle will be powered by the 2.2 lit VARICOR engine churning out 150ps of power and 400 nm of torque. This will come mated to a six-speed manual gearbox. The company is also considering an auto gear.

We also can expect a sub 2.0 lit Diesel mill to be introduced just like Mahindra did for most of its vehicles.

The Tata Hexa will be slotted above the Safari Storme and will be the premium offering from the Indian auto-giant. The Hexa will compete directly with Toyota Innova and Mahindra Xylo. It will be interesting to see as to how Tata fares with Hexa against its rivals.

Tata Motors showcased a new muscular and sporty concept SUV, called the Tata Hexa at Geneva Auto Salon 2015. The concept which unveils a new direction to the design language of future TATA SUVs is […]