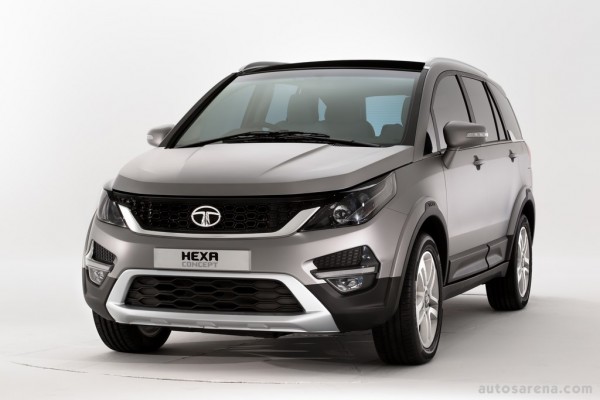 Tata Motors showcased a new muscular and sporty concept SUV, called the Tata Hexa at Geneva Auto Salon 2015. The concept which unveils a new direction to the design language of future TATA SUVs is largely based on the Aria crossover.

The interiors of the Hexa concept come with leather upholstery with seats for six passengers. Build row come with captain seats.

The Hexa concept is powered by an all-new 2.2 litre VARICOR 400 diesel engine with maximum output of 115 kW (156 PS) and 400 Nm of torque. This engine is paired with either a 6 speed manual or a 6 speed automatic transmission. For difficult terrain, a torque-on-demand all-wheel drive is available (Adapterra).

The Hexa concept will head as a production model in 2016 will be positioned above the Aria crossover which could be completely axed in the future. The Hexa concept will also get a new Connectnext infotainment system, Automatic climate control,6 airbags, Electronic Stability Control, powerful projector beam automatic headlamps and rain sensing wipers and many more features.

A three-year project into the trials of connected and autonomous vehicle technology has drawn to a close, with the Coventry-based, Tata Motors European Technical Centre (TMETC) revealing its commitment to shaping the future of mobility. […]

The Tata HEXA has successfully towed a Boeing 737-800 aircraft weighing 43 tonnes at the Delhi airstrip showcasing the power and torque capability of the SUV. The HEXA 4X4, covered a distance of over 50 […]

Tata Hexa launch in October, new flagship model to set new benchmark in terms of ride quality, fit and finish for Tata cars. Tata Motors Hexa SUV has been spotted without any camouflage and seems […]