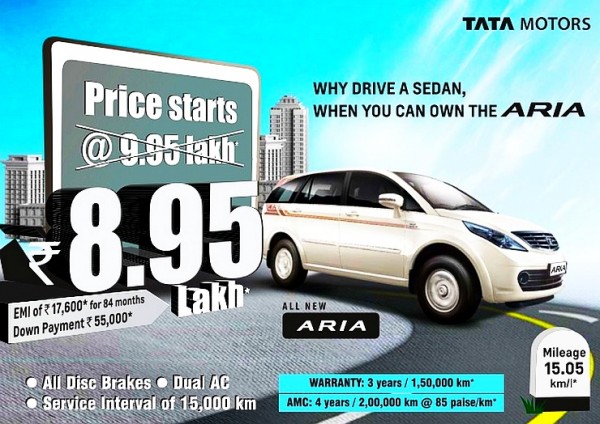 Tata Motors has played the pricing card to revive sales of the Aria which never took off since its launch in 2010. Tata’s flagship model the Aria did not taste success mainly due to the high pricing followed by poor after sales and competition from Innova and then XUV5OO.

Tata Motors launched a 4×2 variant and also a new Pure LX base variant with a price tag of 9.95 lakhs. The Aria launched as a crossover was positioned as an MPV and re-launched with a mild facelift in 2014 with a more powerful 150PS DiCOR engine. The Aria returns 15.05 kmpl.

But sales have always averaged 125 units per month. In a final bid to save the Aria, Tata Motors have further dropped the prices and now starts at Rs. 8.95 lakhs which makes it a good proposition considering the equipment levels the MPV offers.

Please note – Above price is applicable in Bangalore only and for a limited period.

Tata Motors is going to unveil the new small car Zica in Goa on the 1st of December. The car has been spotted numerous times in India testing across different regions. We have managed to […]

Tata Motors commenced pre-bookings for the Tata TIGOR compact sedan.The new Tata TIGOR StyleBack will launched on the 29th of March and the company is accepting bookings across all authorized dealership with a booking amount […]