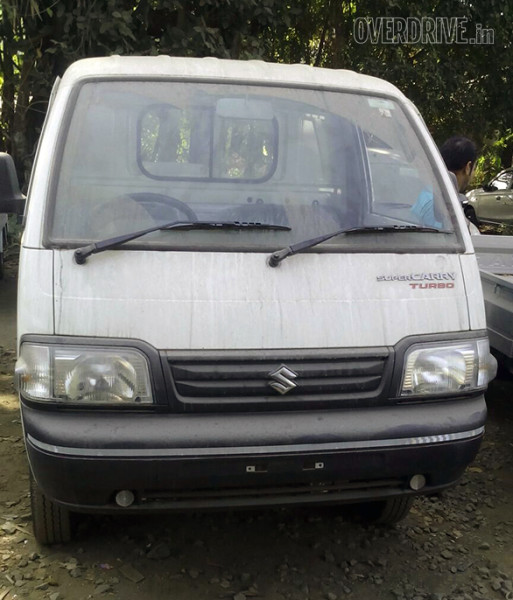 Maurti Suzuki has been working to enter the lucrative Indian LCV segment dominated by the Tata Ace for quite some time. India’s largest car maker will soon introduce the new Super Carry Turbo LCV in the Indian market and will be the first load carrying product.

Thanks to Overdrive to share first images of the Maruti Super Carry LCV ahead of its market launch in the coming weeks. The Super Carry codenamed Y9T has been modified to meet the Indian standards and will be powered by the DDiS 125 diesel engine which also does duty on the Celerio hatchback.

The twin-cylinder 0.8-litre engine will be detuned to develop about 35 – 37 PS of max power and 100 Nm of torque. The engine spec changes will help to further enhance the mileage of the engine which currently delivers 27.62 km/l in the Celerio. The turbo badge suggests the engine will be a turbocharged unlike a DI.

The Super Carry will come with a payload of 1 – 1.5 tonne and will mostly rival Tata’s new Ace Mega and Mahindra Supro. Reports also suggest the Super Carry to be introduced with a CNG option which is a very logical decision considering Maruti;s strong presence in the NCR region. The CNG variant will borrow Eeco’s 1.2 MPI engine and mated to a 4 speed transmission.

Like the premium dealership NEXA, Maruti Suzuki also plans to introduce standalone commercial vehicle dealers which will sell the Super Carry pick-up. According to Overdrive the market launch will take place in a phased manner starting with cities like Punjab, Gujarat and Haryana where the brand is strong and dominant.

The Indian version is based on the Suzuki Carry sold in the Indonesian market. India’s largest car maker has set an ambitious target to double its sales from 1 million to 2 million by 2020. […]

Maruti Suzuki has established a new commercial sales channel dedicated for the Super Carry Light Commercial Vehicle segment. The company which made its entry in the LCV segment with the launch of Carry will currently […]