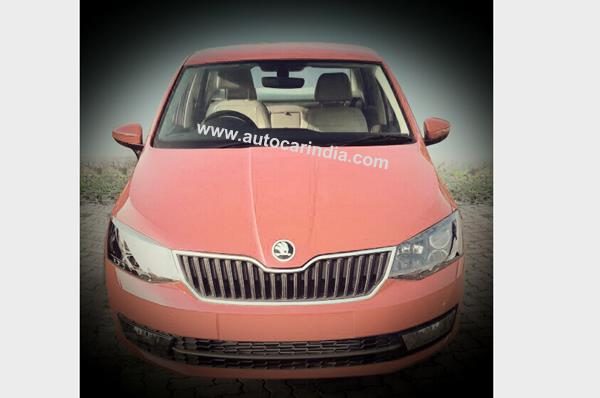 SKODA India will be launching the Rapid facelift sedan in the Indian market very soon. As per Autocar India the launch is scheduled to happen on the 3rd of November.

The Skoda Rapid has been on sale in the Indian market since 2011 and has received minor updates over the years. In 2015 the Rapid received the updated 1.5 diesel engine, a DSG gear box and black package.

The 2016 refresh model will be the first major facelift the car will receive over the years.

The styling is borrowed heavily from the SKODA Fabia hatch available in the international markets. New bonnet with dual sharp edged beadings culminating in a geometric shaping of the grille, head lights which integrate seamlessly with the grille, grille design now in line with the new design philosophy, new front bumper and tails lamps when lit, illuminates with C-Channel impression.

Overall the car looks fresh and will be equipped with an updated diesel engine which now produces over 110 Ps. Transmission options include a 5 or 6 speed MT and 7 speed DSG. The 1.6 petrol motor will also be on offer with a 5 speed MT and 6 Speed AT.

In terms of features, the Rapid facelift sedan will get minor tweaks to the dashboard and a new touch screen interface in the centre. The Rapid will be offered in 3 trims and will get ABS, EBD, BA and dual air-bags as standard from base variant.

All the cars will be getting updates in 2017 while Hyundai will launch the new generation Verna in the Indian market.

The Rapid facelift sedan could pave the road for the Fabia hatch which was discontinued due to poor response. With the premium hatch segment showing lots of momentum, the Fabia could be a decent option now.

SKODA India has introduced the MY 2017 SKODA Rapid sedan in the Indian market. The MY 2017 Rapid comes with new features like 16inch Alloy wheels, soft touch boot release button and Reverse Camera. Currently the […]

SKODA recalls Octavia sedan over faulty child locks. Skoda Auto India has recalled the Octavia sedan in the Indian market to check the manual child lock of the two rear doors. The recall will include […]

ŠKODA AUTO India, has organized a ‘Pre-Monsoon Campaign’ at all its dealerships across India (except Tamil Nadu). The 40 point complementary check-up camp will be held from 16th May 2016 to 15th June 2016. As […]