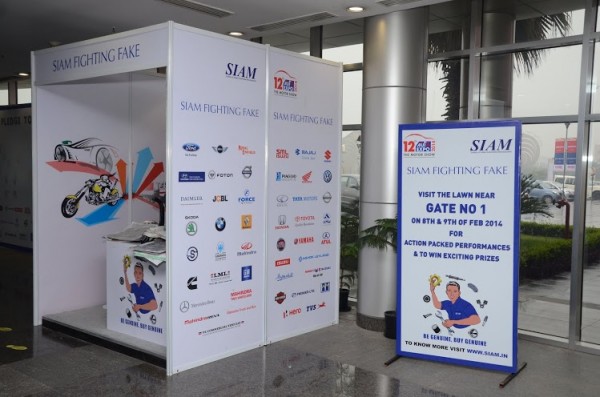 As a part of first-of-its-kind initiative at the Motor Show of Auto Expo 2014, SIAM launched the ‘Say it with Slogan’ which allowed to create awareness on counterfeit spare part market amongst visitors & also helped to connect with the young and tech savvy audience.

To achieve the above SIAM engaged visitors at ‘SIAMFightingFake’ stalls located at three different locations across the venue. Each stall was provided with an interactive kiosk having in-built social media to glue the visitors to the campaign. This included on-spot prices for best slogan, wherein, visitors were asked to give their suggestions for slogan on ‘Fake’. This section received an overwhelming response with 3000+ people suggesting  unique slogans in addition to liking the Facebook page of ‘SIAM fighting fake’. Painting competitions based on the theme of Real v/s Fake organized at various schools across Delhi and Mumbai also saw a heavy response, best out of which were put to display at the three stalls.

In addition to the above, three pledge walls were placed at three different locations, at the entry of VIP Lounge, at the entrance of Hall 7 and at the exit of Hall 8. The aim of the visitor pledge wall was to motivate the use of genuine vehicle spares and also familiarize the people with the risks involved in spurious spares. The pledge wall was autographed by numerous high profile delegates, which included Mr. Vikram Kirloskar, (President SIAM), Mr.Rajesh Bagga (Chairman SIAM ACG) and Mr.R.S.Kalsi (Co-Chairman SIAM ACG) , Mr.Takashi Kikuchi (President ISUZU).

Ever wondered why you vehicle keeps breaking down even after you get it repaired from a trusted source? Did you check if the parts used were genuine or from the OEM? Spurious or duplicate auto […]

Be Genuine, Buy Genuine, Campaign against Counterfeit launched by SIAM

The rise of fake and spurious parts have not only been hurting the original equipment manufacturers but also questioning the safety of vehicles. In a bold new initiative to fight against spare parts counterfeit manufacturers […]

As a part of the month-long Road Safety Awareness Program, the Society of Indian Automobile Manufacturers under the aegis of Ministry of Road Transport and Highways and Delhi Traffic Police hosted a virtual seminar on […]