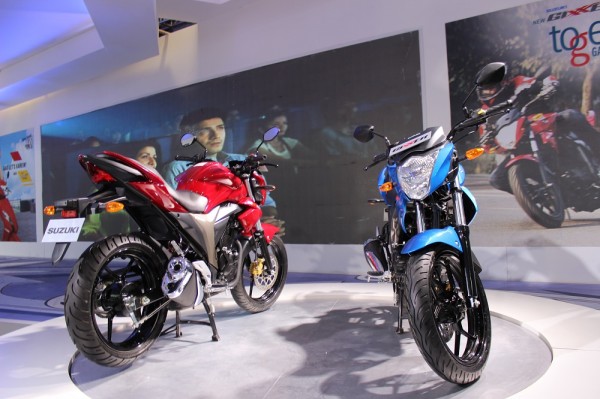 In January Suzuki made it loud its intentions about the Indian market by announcing not one but three important products for 2014. Suzuki launched the Inazuma 250cc naked sports bike and also unveiled the Lets scooter and the Gixxer 150cc motorcycle.

The Lets scooter was launched officially in May and the Gixxer will be launched just before the festive season starts in August.

The company claims the GIXXERs engine and chassis was developed by the engineers who designed the legendary GSX-R series. The engine comes with cutting edge SEP technology, which gives an exceptional running performance with a broad low-end torque and dynamic mid-range power for strong acceleration.

The Gixxer will be the second offering from Suzuki in the 150cc segment features like:

The Gixxer will be positioned as a premium 150cc sports commuter and will compete with the likes of Yamaha FZ series, yet to be launched Pulsar 180 (NS) and the Honda CB Trigger.

Expect the bike to be priced around Rs. 75,000 mark which makes a direct competitor the FZ series which will also get a comprehensive upgrade this year.

Since its launch in India in 2014, the Gixxer brand from Suzuki is known for quality, styling and performance. To maintain its competitiveness, Suzuki has launched the 2018 series of Gixxer and Gixxer SF motorcycles in […]

Suzuki Motor Corporation announced the product and exhibit line-up for the 43rd Tokyo Motor Show 2013. The small car specialist has lined up a number of models which could give some insights of the future […]