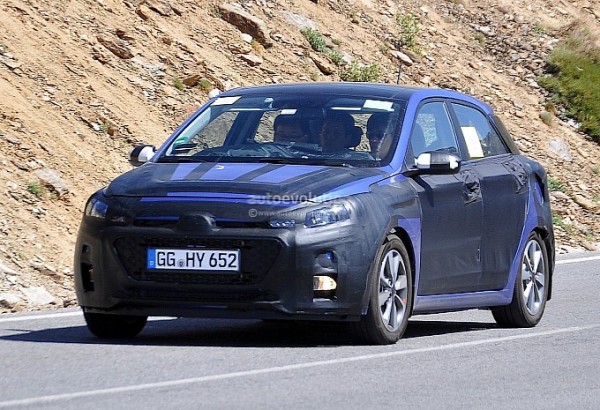 India’s second largest car maker, Hyundai Motor India will launch the new i20 premium hatchback in July. The i20 is third bestselling car after the Grand i10 and Eon. The launch will be a global premiere and delivers could start soon.

The i20 sales are declining month on month and it gives us an indication, the dealers are asked to exhaust their stock before the new i20 is launched.

The new i20 has been caught numerous times in India and globally and is going to set new bench marks in terms of design and equipment level. Hyundai could launch a 2 models an Indian model and a global model which is going to debut at the Paris Motor Show. Hyundai also adopted a similar strategy with the new i10 which has a longer wheelbase than the international model.

The new is built on an all new platform code named IB and the car caught testing seems slightly larger than the outgoing model and will completely replace the current model. In terms of design the car will have a similar silhouette and will bear the new Fluidic Sculpture 2.0 design language.

In terms equipment expect all the features to be carried from the current gen i20 and will sport additional features like rear AC vents, cruise control, touch screen audio system etc

Hyundai will also launch the new compact SUV in Indian next year which is most likely to share its under pinning’s with new i20.

The Polo facelift, Swift facelift, Punto facelifft and Bolt hatch from Tata Motors will be the new offerings in the premium hatch segment. We are certain the new i20 could be the new bench mark in terms of design and equipment. On the pricing front, car could start from Rs. 5 lakhs onwards to upto 8 lakhs for the top end diesel.

Now you can buy a Hyundai car seating at home via Hyundai Online Car Booking. Hyundai Motor India Ltd (HMIL), have opened the Online booking for its range of cars for ease of customers across […]

Tucson SUV to bridge the gap between Creta & Santa Fe. Hyundai is betting on premium products for 2016 and will soon introduce the Tucson SUV after recently introducing the Elantra sedan. The Tucson SUV […]