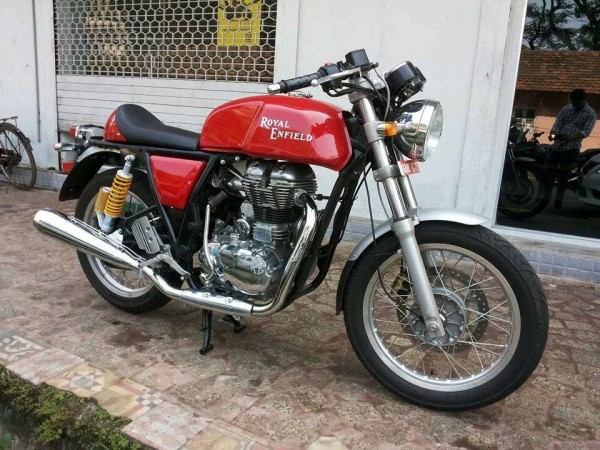 Iconic motorcycle maker Royal Enfield, is all set to launch its much awaited cafe racer inspired motorcycle, the Continental GT on November 26 in Goa. The bike has already reached the Goan shores and were snapped by Rajiv Kolvenkar. The Continental GT made its official debut in UK in September priced at £ 5,200 (Rs 5.2 lakh) approximately on-road.

The Continental GT is Royal Enfield’s first cafe racer in 60 years and the company has been showcasing the concept model for the last 2 Auto Expo’s. First shown at the 2010 Auto Expo, the almost production version prototype was shown at the 2012 Auto Expo.

The motorcycle is powered by a single-cylinder 535cc fuel-injected UCE engine, which makes 29.1PS of power and 44Nm of torque. The engine is mated to a 5-speed manual gearbox and motorcycle has a kerb weight of 184kg with 90 per cent fuel and oil. Fuel tank capacity is 13.5 litres.

Inspired from the 1960’s café racer models, the GT boasts typical cafe racer styling and we already see the bike to gather a long waiting list from prospective buyers, thanks to the strong fan following of Royal Enfield motorcycles.

The Continental GT is manufactured at Royal Enfield’s Oragadam plant which became functional from April 2013.

The 10th edition of the Royal Enfield Himalayan Odyssey shall be flagged off from New Delhi on the 22nd of June 2013. This is the holy grail of all Royal Enfield rides organised through the […]