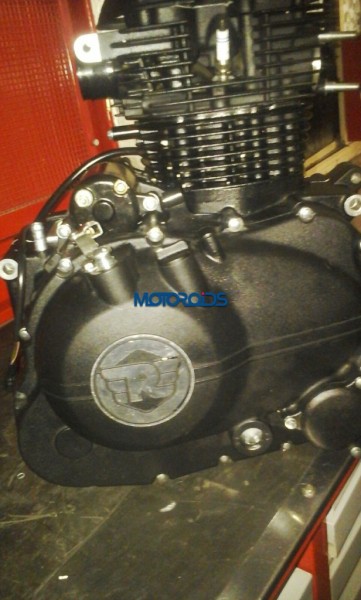 After snapping the bike many times, we now have some details on the engine specs. Royal Enfield has developed an all-new 410cc single cylinder engine which will do duty on the new Himalayan motorcycle. The engine was snapped which looks like in the plant and will be the smaller motor on offer for the new adventure bike.

The Himalayan will be powered by two motors – a single cylinder 410cc engine and a twin cylinder 750cc engine. Both engines are air-cooled and will have separate oil-coolers for more efficient cooling.

The 410cc air-cooled single-cylinder engine with oil-cooler will most likely be equipped with a Single Over Head Camshaft (SOHC). The engine will develop max power of 24 bhp and over 30 Nm of peak torque. A five speed transmission will be used.

As per internet sources the Royal Enfield Himalayan will be launched in two variants – a city variant and a more rugged off-road model for those who prefer adventure rides.

The two models will be powered by the same engines and could have slight tweaks to the suspension, overall height and tyres to suit the different riding conditions. The Royal Enfield Himalayan is expected to be launched in two versions – a city variant and an off-road model, both of which would use the same engine, reportedly in the same state of tune.

Currently there is no competition in this space from any other Indian two-wheeler manufacturers and this segment is mainly dominated higher capacity bikes mainly from Triumph and Kawasaki. With leisure riding showing enormous potential we could expect other bike makers to look at this segment.

Royal Enfield to launch Continental GT on November 26 in Goa

Iconic motorcycle maker Royal Enfield, is all set to launch its much awaited cafe racer inspired motorcycle, the Continental GT on November 26 in Goa. The bike has already reached the Goan shores and were […]

Himalayan prices announced – Available in Maharashtra at Rs. 155,545 (Ex-showroom) and Rs. 178,872 (on-road) in Mumbai Bookings starting March 17, 2016, deliveries to commence soon Royal Enfield launched the Himalayan motorcycle which has been […]