French car maker is betting big on the Kwid hatchback. The company which launched the SUV look alike Kwid in September 2015 plans to expand the range with new engine and transmission options. The company had hinted the same at the launch and if sources are to be believed the Kwid will soon receive a new 1.0 petrol engine paired to a 5 speed manual and AMT gear box.

The Renault Kwid has so far received more than 80,000 bookings across India and comes in 6 variants at a starting price of Rs. 2.56 lakhs.

The Renault Kwid is currently powered by a 799 cc three-cylinder petrol engine which produces max power of 54 PS at 5,678 rpm and 72 Nm of max torque at 4,386 rpm. The engine is paired to a 5-speed manual gearbox, and delivers an ARAI-rated fuel efficiency of 25.17 km/l. 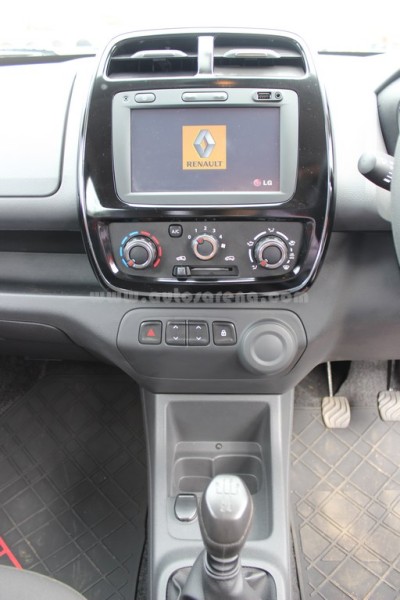 A rotary AMT switch will be placed in the space as shown in the above pic and will not come with sport function. There will be no manual mode also.

The new 1.0 petrol engine is expected to deliver a max power of 70 PS with decent torque and high fuel efficiency. Renault may also introduce ABS and Dual airbags in these variants. The new versions will mainly compete with the likes of Maruti Celerio, Alto K10, Wagon R, Tata Zica, Hyundai Eon and upcoming Mahindra KUV 100.

Renault has big plans for the Auto Expo which includes the launch of Kwid new variants, launch or unveil of the Duster facelift, showcase of the seven seater Captur crossover developed mainly for the emerging market and most likely the flagship Talisman sedan.

Renault India targets 240 dealerships by the end of 2016

Riding on the success of Kwid small car and the Duster SUV, French car maker Renault is aggressively expanding its network reach across the country. The company plans to increase its dealership network from 208 […]

Renault, the French car maker participated for the second time at the Indian auto expo and used this opportunity to unveil a KWID concept car, a new vision tailored for new kind of markets. This […]