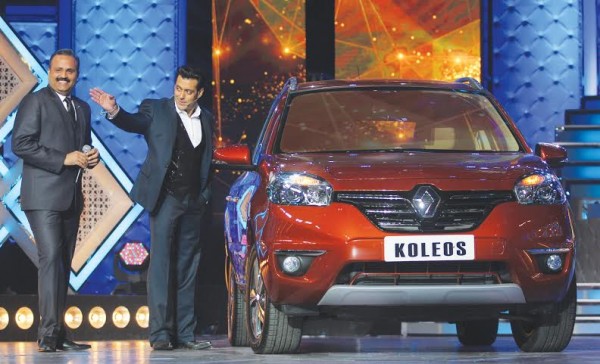 Renault India, launched the new face lifted Koleos SUV in the Indian market at the Star Guild Awards in India. The key to the new Koleos was handed over by Mr. Sumit Sawhney- Country CEO and Managing Director, Renault in India to Mr. Salman Khan at the recently held award function. The SUV was unveiled by Bollywood actor Salman Khan who is also the first owner of the new Koleos.

The Koleos is now offered in three variants, 4×2 MT, 4×4 MT and 4×4 AT. The French car maker has added a new manual gear box option which is available on both the 4×2 & 4×4 drivetrains. The Koleos is powered by a new 2.0 dCi diesel engine which develops max power of 173 PS@3750 RPM (earlier model produced 150Ps) and max torque of 320 NM @2000 RPM. The automatic variant gets a new 6 speed gear box while the manual variants come with a 6 speed gear box.

The face lifted Koleos is priced at Rs. 22,32,999 – 4X2 manual, Rs. 25,13,999 4X4 manual and Rs. 26,18,999 4X4 automatic transmission – all prices are ex-showroom Delhi. With new lower priced variants on offer, Renault is looking at bigger numbers from the Koleos. The SUV will have to battle the new Santa Fe which will also be available in similar variants and will be priced aggressively. [Click here to read more about the Santa Fe (brochure leaked) ]

Many auto manufacturers are betting on the style icon to market their products. Salman Khan was also the first to buy the new Audi RS7 in India and unveiled Suzuki two wheelers, Inazuma, Gixxer and Let’s scooter earlier this month.

Renault Kwid launch in festive season, all details inside

Renault is all set to launch the Kwid small car in the Indian market soon. During the media drive briefing the French Auto maker shared some important information about the Renault Kwid and the company strategy […]