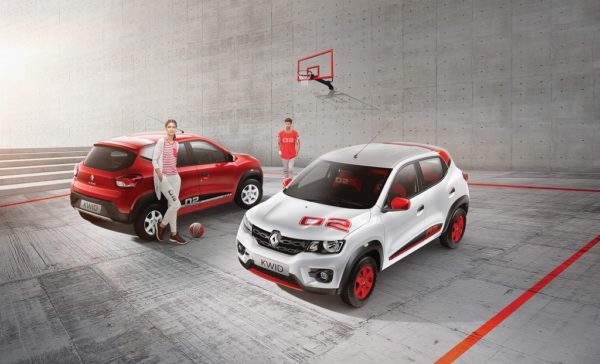 New Kwid 02 Anniversary Special Edition will be offered in both 0.8L and 1.0L SCe powertrains in manual transmission (MT).

The Kwid 02 Anniversary Special Edition will be available in two largest-selling colours, red and white.

The 02 Anniversary Edition will be available in both 0.8L and 1.0L powertrains, in the RXL and RXT variants, manual transmissions (MT). The 0.8 litre SCe range is powered by a 54bhp, 799cc, three-cylinder engine, paired to a five-speed manual transmission. The 1.0 SCe develops 68Ps and is paired to 5 speed manual gearbox. The company also offers an AMT gearbox on the 1.0 litre engine.

Bookings for the Renault KWID 02 Anniversary Edition have commenced across all Renault dealerships in India. Bookings can be made either at the dealerships or through the KWID App, which could be easily downloaded from the Google Playstore or Apple Store.

To celebrate the first anniversary of KWID, Renault embarked on an iconic drive with the KWID from India to France. The vehicle traversed through 13 countries and some of the toughest terrains covering 18,996 kms before reaching Paris, proving its superiority and reliability.

Priced at Rs 11,89,499 lakhs (Delhi ex-showroom) Packed with class leading features led by the i Drive technology that enables unmatched performance and fuel efficiency Built to make the challenges of everyday driving an enjoyable […]

Renault’s new small car was unveiled to the world a few months back and the company will soon launch the production version in the up comping weeks. The Renault Kwid was spotted in Silver and […]