Renault India, is one of the fastest growing automotive companies in India thanks to the Kwid hatch which has helped the French car maker to register a growth of 173% in June 2016.

The SUV lookalike hatchback has registered more than 1.5 lakhs bookings and numbers could swell in the coming month. Renault has increased the cars production to 10,000 units a month but will have to further increase to meet the growing demand. 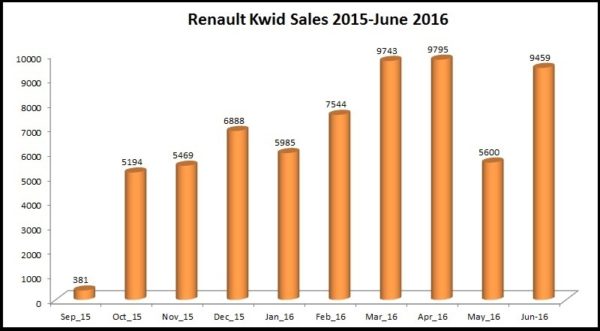 Renault sold 9,459 units of entry hatch in June and has been the fifth best-selling in the same month.

For the first time Renault has been able to reach the top 5 and it would be a challenge for the company to maintain the fifth spot.

SUV and rugged looks, spacious interiors, large 300 litres booth, Touch screen infotainment system a first in segment are some of the key USPs of the car’s success.

Renault has sold more than 66,000 units of the hatchback in the Indian market since its launch in September 2015.

Renault is contemplating to launch the Climber concept and Racer concept shown at the 2016 Auto Expo. The company may consider launching accessory kits the two concepts and could be launched in the coming months.

Renault India will soon be introducing the AWD variant of the Duster. The Duster AWD will be powered by 1.5, 110Ps diesel engine and will be available on the top RxZ variant only. The company […]

Renault to launch Kwid 1.0 on 22nd August, more details inside. Renault will launch the bigger engine capacity Kwid 1.0 on the 22nd of August. The French automaker will not launch the AMT version at […]