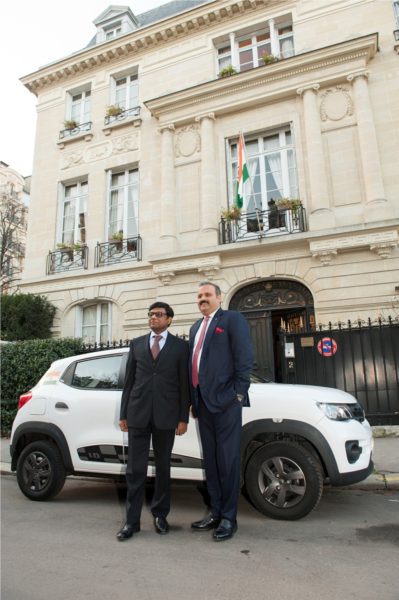 Renault Kwid drives across 13 countries spanning over 45 days to cover a massive distance of 19,000 kilometers.

Renault India, to celebrate the first anniversary of the “Make-in-India” KWID, embarked on a historic drive from Delhi to Paris.

The drive started from India Gate at a temperature of 25 degrees and was driven in areas of stark contrast, going upto -25 degrees, through Myanmar, China, Kyrgyzstan, Kazakhstan, Russia, Estonia, Latvia, Lithuania, Poland, Germany, Belgium, until it finally entered France.

“Today, Renault KWID is one of the biggest ‘Make in India’ success stories out of India in the small car segment, making Renault one of the fastest growing automotive brands in India. Renault has already started the exports of Renault KWID to SAARC and African countries, taking the excellence of Indian manufacturing and engineering to the world. The Delhi – Paris drive was conceptualized to celebrate the success of this car and to highlight its superiority and reliability, testing it in the most challenging driving conditions. Such drives are usually done with much bigger and more powerful cars, but the KWID has once again proven that it truly a game changer and a car of global repute.”

Through the 45 day drive, KWID was made to negotiate a mix of different challenges in the form of snow-clad roads, sub-zero temperatures, monsoons with heavy rains and floods and places without traversable roads. No matter what the terrain, Kwid powered its way through, managing a top speed of 174kph at the autobahns in Germany.

Rahul Kakkar, a drive enthusiast who led the team of drivers for this mammoth drive, shares,

“We were confident of completing the drive, however there was a definite apprehension especially considering we were to cover a massive distance of 19,000kilometers! KWID is an entry level hatchback, and such cars are more suited for city commutes, designed for Indian conditions and not freezing cold weather. However, KWID came out trumps in the most challenging conditions, and there was not even a puncture through the drive. The car reached Paris in pristine condition and looked like a brand new car, fresh from the showroom.”

Priced at Rs 11,89,499 lakhs (Delhi ex-showroom) Packed with class leading features led by the i Drive technology that enables unmatched performance and fuel efficiency Built to make the challenges of everyday driving an enjoyable […]

Renault KWID crosses another sales milestone of 1.3 lakh cars. Renault India announced the KWID has been true game-changer and volume driver with more than 1,30,000 cars sold so fa in the Indian market. The […]