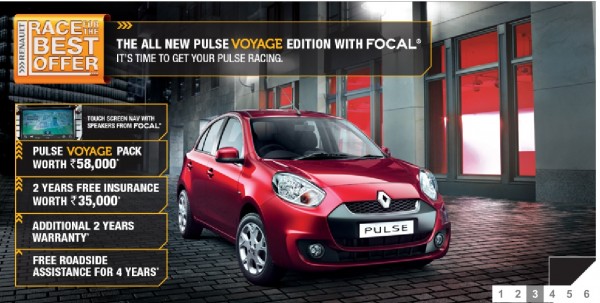 Renault India has introduced a limited edition of the Pulse hatch, named as Voyage edition. The company did not issue any release but have silently updated the website.

The Voyage edition gets a touchscreen multimedia system with navigation and Focal speakers only. There are no changes on the outside or interiors from the standard model. The Pulse Voyage accessory pack is worth Rs. 58,000.

The Pulse is powered by a choice of petrol and diesel engines. The petrol engine is a three-cylinder, 1.2-litre which produces 76 PS and 104 Nm, while the diesel variant is powered by a 1.5-litre four-cylinder engine producing 64 PS and 160 Nm of torque.

Renault may introduce the Pulse with cosmetic upgrades in 2014 considering the car has not received any major update since launch.

Renault Kwid media drives begin in Goa tomorrow and our Eagle eye Mr. Herc has just managed to snap the top variant Kwid on the roads. Two cars were spotted simultaneity one in Red and […]