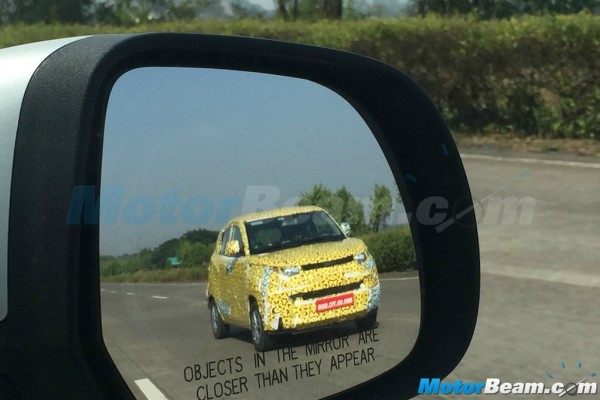 Mahindra S101 or XUV 100 as speculated has been caught testing and what seems like these are the final product spec vehicles. Mahindra has had a good 2015 with 2 major launches XUV 500 facelift, automatic version and the new baby TUV 300 which has been quite successful in the first three months of launch.

The S101 or XUV 100 is going to be Mahindra first product to be introduced in the popular and most competitive small car segment which is ruled by Maruti Suzuki and Hyundai.

The S101 like the Renault Kwid will feature an SUV stance and in the camouflaged model looks like a Range Rover Evoque (please stretch your imagination a bit here). On the front the grille is similar to that found on the XUV 500 and Scorpio unlike the TUV 300 and mesh finished ducts on the lower end of the bumper. From the side the vehicle looks like a hatchback with a sloping roof line. The rear end is round and the overall silhouette is quite proportional. The S101 or XUV 100 gets door handles similar to the Chevrolet Beat mounted on the door pillars.

The cabin gets bench style seating in the front row and dash mounted gear box. The Infotainment system gets a LCD screen with AUX, USB and Bluetooth connectivity.

Power will come from a newly developed 1.2 petrol engine with about 60-65 horse power and the diesel engine will be borrowed from TUV 300. Transmission options include a 5 speed manual and Mahindra may offer an AMT in furture.

Thanks to our friends from Shifting the Gears and Zigwheels, we have more images to be shared of the KUV 100 just before launch. Some quick pointers from the images Long rear scooped headlamps with […]

Mahindra & Mahindra announced its plan to deliver 50 units of the eSupro Passenger van to the Himachal Road Transport Corporation (HRTC). As part of HRTC’s ‘Ride with Pride’ initiative, the battery-powered, all electric, zero […]

Mahindra & Mahindra has introduced the new the KUV100 compact SUV at a starting price of Rs 4.42 lakhs (ex-showroom, Pune). Prices for the petrol variant start at Rs 4.42 lakh and the top-spec petrol […]