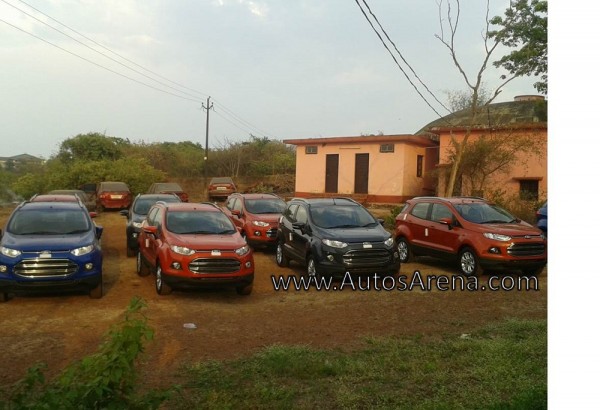 Ford is getting ready to launch the all new EcoSport in the Indian market. The company has organized a media drive in Goa and has already shipped a couple of cars which were spotted parked at the Ford Goa dealership.

Seems like a mega drive is planned in Goa as there are more than 10 EcoSport’s lined up. We quite liked the vibrant Orange and Blue shades but the grey seems to be odd.

Ford will launch the sub four metre EcoSport sometime in June and will be offered in three engine variants: 1.0 Ecoboost, 1.5 TCI and 1.5 TCDI which also does duty on the on the new Fiesta.

Ford has borrowed a large number of components from the new Fiesta as the two cars shares the same platform. This will help to keep the costs under check and we can expect some aggressive pricing from the America car maker.

The Figo helped Ford to gain volumes and has been one of the bestselling car. The EcoSport will be a very crucial car for the American car to get back to momentum in the Indian market. The urban SUV will compete with the likes of Renault Duster and Mahindra Quanto.

Get your Ford car serviced before the Monsoon Ford India recently announced its Annual Monsoon Service Camp to keep all Ford cars prepared for the challenges of the oncoming monsoon season. Heavy […]

Ford India to Open Bookings for Figo Aspire from July 27, 2015

First sub-four meter sedan with standard Driver and Passenger airbags; Available with up to six airbags for even greater peace of mind Figo Aspire to be offered with a choice of responsive, efficient petrol  and […]