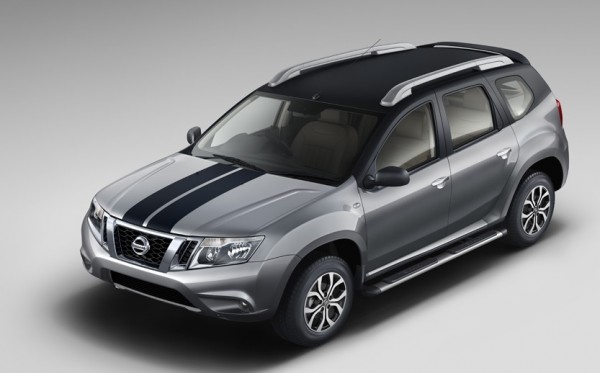 Nissan’s Terrano compact SUV completed one year in the Indian market this month. To mark this occasion, the company introduced a limited ‘Anniversary Edition’ of the Terrano.

The ‘Anniversary Edition’ is aimed at enhancing the bold lines of the SUV while adding exclusivity to the package. This special version will come with a bundle of styling and convenience features, both on the exterior and interior front.

Unveiling the Terrano ‘Anniversary Edition’, Guillaume Sicard, President – Nissan India Operations said, “The Terrano is our first compact SUV in India and the torchbearer of our SUV heritage. The response to the Terrano has been overwhelming. It has been well accepted as an urban compact SUV and has established itself as a rugged yet stylish vehicle.”

“This limited ‘Anniversary Edition’ is an invitation to our customers to celebrate Terrano’s success. We are sure that these exclusive touches will excite our customers and make their Terrano experience even better.”

The styling features include twin racing stripes on the bonnet, blacked-out roof and door pillars and a rear spoiler. Side steps on either side provide easier ingress and egress from the vehicle, while adding muscle to Terrano’s side profile.

A chrome garnish strip on the tailgate and chrome door handles enhance the premium feel. To top it all up, an ‘Anniversary Edition’ badge guarantees exclusivity to owners.

On the inside, the ‘Anniversary Edition’ gets a head-up display. A premium feature aimed at providing vital info to the driver, the head-up display projects driving information on to a screen in the line of sight of the driver. The unit can be paired with navigation apps on smartphones via Bluetooth and displays directions along with time and vehicle speed.

This premium feature is found only in high-end vehicles and Terrano ‘Anniversary Edition’ is the first vehicle in its segment to offer this.

The vehicle will be limited to just 450 units nationwide and will be available only as an extension of XVD THP and XVD THP Premium variants. The Terrano ‘Anniversary Edition’ XVD THP is priced at INR 12,83,645 while the XVD THP Premium bears a price tag of INR 13,13,725, both prices ex-showroom New Delhi. The vehicle will be available exclusively for order online at www.bookyournissan.in/terrano.

Nissan Terrano to be unveiled on the 20th of August

It’s official. Nissan will unveil the new Terrano SUV in India on the 20th of August. The Terrano based on the Renault Duster will be more than just a re-badged product and will be differentiated […]

Nissan India strengthened its presence in Tamil Nadu with the inauguration of a new dealership, Jubilant Nissan, in Chennai. The newly-opened showroom is the 5th Nissan dealership in the […]