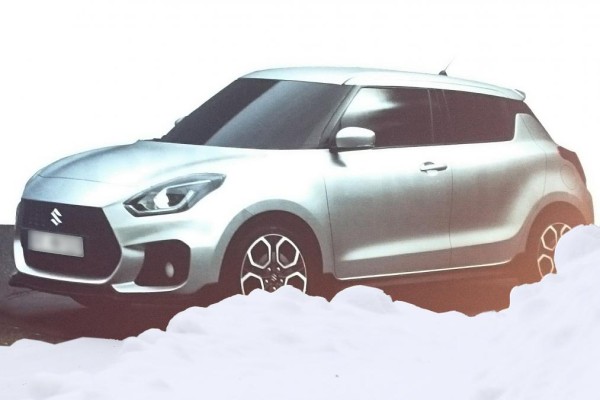 Suzuki Swift was a game changer not only for parent Suzuki but most importantly for the Indian company Maruti Suzuki making it one of the most important and successful model since launch. In 2011 the company introduced the new Swift which is now showing ageing effects considering the competition have moved to a segment above.

The Swift can be credited to the first car to introduce Indian’s to the premium segment which is now dominated by Hyundai Elite i20 and the new launched Baleno.

Well in 2017 the new Swift will hit the roads and the images of the next gen Swift has been leaked from a dealer conference revealing exterior and interior designs.

The new 2017 Swift retains the classic silhouette but gets a sharper and sportier design. The new sloping roof, larger hexagonal grille, new headlamps neatly integrated in the bonnet and tailamps which remind you of the first gen Swift. The door handle is moved to the C-pillar similar to the Chevrolet Beat and recently launched KUV100. The car may get dual tone 15” alloy wheels, roof spoiler and rear diffuser.

Come inside and the Swift gets a completely new dashboard adopting a more premium design with a 3 spoke steering wheel, large inbuilt screen in the centre console, two pod instrument console and contrasting trim on the dash, door panels and centre console.

The new Generation Swift will be built on the new platform sharing its underpinnings with the Baleno which meets future crash norms and safety standards.

Power to the new Swift will come from the tried and tested 1.2 K series petrol and 1.0L Boosterjet could be offered on the sportier RS model. Transmission options include a 5 speed manual and CVT or AMT unit. Suzuki may strap the Swift with the in-house developed 1.5 diesel engine or may continue with the 1.3 DDiS which confirms EURO 6 emission norms.

The Swift will compete with the likes of Grand i10, Tata Bolt, Nissan Micra and Mahindra KUV 100.

Maruti Suzuki has introduced Celerio VXi+ limited edition with the on-going festive season. The company is offering a the Celerio VXI with an accessory package which Body coloured ORVMs with turn indicator, body coloured handles, […]

The next-gen Suzuki Swift rendering have been revealed. Launch likely in 2017 One of the most loved and lauded car of all time, the Suzuki Swift is bound for a makeover. The outgoing model of […]