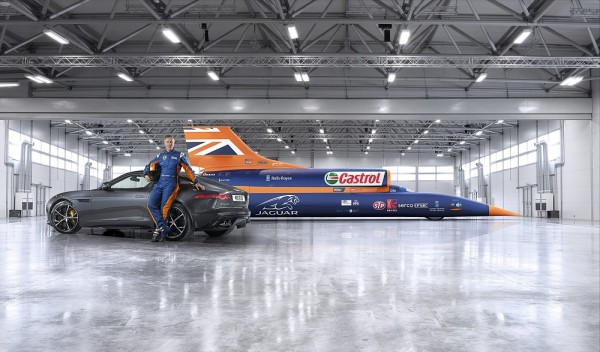 The test marks the start of a major technical partnership between Jaguar and The Bloodhound Project, with the ultimate aim of raising the world land speed record above 1,000mph and to assist in inspiring the next generation of scientists and engineers, which is the overall objective of the project. The current record stands at 763.035mph and was set by Andy Green in Thrust SSC in 1997. Andy will drive the Bloodhound Supersonic car.

On the relatively soft surface of the Hakskeen Pan desert in the Northern Cape of South Africa, the stability of the AWD F-TYPE R Coupé and its dynamic ability – it will reach 60mph in just 3.9-seconds with a limited top speed of 186mph – enabled the successful completion of a vital communications test for the Bloodhound SSC team.

Ian Hoban, Vehicle Line Director, Jaguar said: “Our target with engineering the all-wheel drive F-TYPE was to maintain the engaging rear-drive character that’s so important to Jaguar sports cars, yet offer even greater dynamic capability. The result is a controllable, exploitable and blisteringly fast performance car in all weather and road conditions.”

The AWD F-TYPE R Coupé was driven flat-out by Bloodhound Project Director and former World Land Speed Record holder, Richard Noble who said: “We are absolutely delighted to announce Jaguar as a Main Partner to the Bloodhound Project. This is a very fine match – Jaguar is very strong on innovation and with its huge drive in advanced technology, education and motorsport track record, we have the perfect partner. Together we have developed outstanding inter-team synergy and this is a very special relationship.  We are proud to carry the Jaguar branding on Bloodhound SSC.”

Fitted with the same radio equipment as the jet and rocket powered Bloodhound SSC, the F-TYPE was driven head-to-head at top speed with a similarly equipped jet flown at 500mph and just 50 feet above the ground. The combined closing speed of almost 700mph enabled the successful test of the system that will allow communications between the ground crew and Andy Green in Bloodhound SSC, which will run for the first time on the Hakskeen desert just twelve months from now.

The addition of all-wheel-drive is one of a number of performance enhancements to the award-winning Jaguar F-TYPE range which will grow from six to 14 derivatives in 2015 – the full range will debut at the LA Auto Show on 19 November.