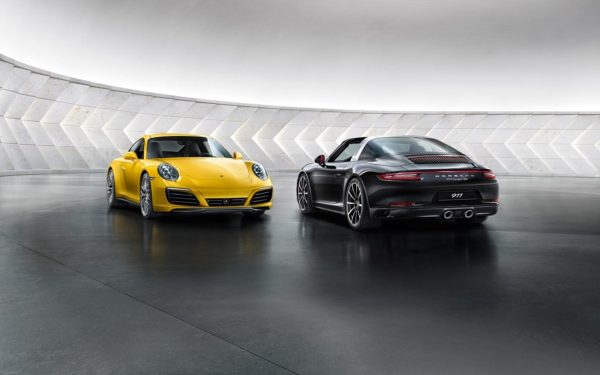 Porsche to launch new range of 911 on 29th June. No major changes expected

Porsche is going to launch the new range of the iconic 911 on the 29th of this month, The news has been confirmed by the company officially by sending media invitations to attend the launch. The launch is taking place in Mumbai.

The updated Porsche 911 was first unveiled last year around December (2015). The same vehicles were later showcased in the 2016 Detroit motor show.  Now they are being shipped into the Indian waters to try out their luck. The vehicle still remains a CBU import which means nothing less than a premium price tag can be expected.

The vehicle hasn’t been much altered with in terms of exterior styling. This means that the streamlined shape from the previous generation is retained. The design language of the car though has been slightly altered. This gives the New Porsche 911 a much sharper and edgier look and thereby contributing in decreasing the form drag.

New pair of head-lamps with day time running LED’S and a modified bumper to facilitate larger air intake are the noticeable differences.

The German car-maker has made this vehicle extremely safe with the inclusion of features like – Porsche Active Suspension Management (PASM), Porsche Dynamic Chassis Control (PDCC) roll compensation and the Porsche Ceramic Composite Brakes (PCCB) to name a few.

The Porsche range is powered by a flat six twin-turbocharged 3.8 litre gasoline engine. All the models have Porsche’s PDK automatic gearbox as standard. The Porsche Turbo S churns out 572 bhp which is a slight improvement over the previous generation.

The rest of the line-up includes 533 bhp Porsche 911 Turbo and the carrera twins which churn out 370 and 420 bhp respectively.

The New Porsche 911 Carrera Cabriolet is speculated to be priced around 1.5 Crore whereas the top of the line legend Porsche 911 turbo s will cost you anywhere close to 3 crores.

Porsche partners with Women Beyond Boundaries for Himalayas expedition

Porsche India has partnered with the organisation ‘Women Beyond Boundaries’ (WBB) on a 20-day expedition across the Himalayas. Nidhi Tiwari, founder of the organisation, showcased the need for women’s empowerment through mobility, by driving the […]

Porsche 911 Carrera and Carrera S Coupe & Cabriolet launched. The very mention of car-racing conjures up images of Porsche burning rubber on the race-track. And why not? Porsche was born on the track. It was born to […]

Porsche Indian is on an expansion mode and has recently opened its eighth dealership in India. The new dealership is located in Gurgaon on the Golf Course road and is the only dealership in the […]