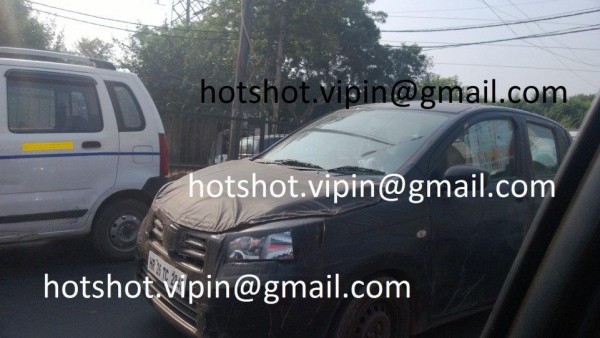 India’s largest car maker is working hard to maintain its market share and has been refreshing its line-up with new models at regular intervals. Maruti Suzuki which is the leader in the hatch segment plans to add new models to its long line-up. The company has started working on the next gen A-Star/Alto internally known as YL7 and was recently caught testing in Gurgoan for the first time by Vipin. The test mule was completely camouflaged and had similar silhouette as the current A-Star but a completely different front. The 8th gen model of the Alto/A-Star will replace the Estilo and A-Star in the Indian market.

The YL7 may also be the first car to be powered with a 800cc diesel engine which the company is developing in-house. Internationally the new Alto is likely to be powered by 660cc 3 cylinder engine that will replace the 1 liter K-Series petrol motor. In India Maruti may continue using the 1.0 K-Series engine with a similar power output.

The YL7 is a global model and could also replace the Splash (Maruti Suzuki Ritz) in few markets. Maruti Suzuki is also company is also entering new segments like the MPV, compact SUV. The Ertiga and Swift Dzire have helped the company increase its share in new segments.

Globally the Alto is sold as Alto, Celerio and Nissan Pixo. This model could help India’s largest car maker to significantly increase its export numbers and may topple Hyundai which is currently India’s largest exporter.

With more than 35,000 bookings for the Celerio, Maruti Suzuki has introduced Celerio Green which runs on CNG. Celerio Green is priced at Rs.4.68 Lakh (Ex-showroom, Delhi), and is available in the VXi trim with […]

India’s largest maker is gearing to launch the in-house developed diesel engine for the first time in India very soon. The new 2 cylinder 793cc diesel engine will first be strapped on the Celerio and […]