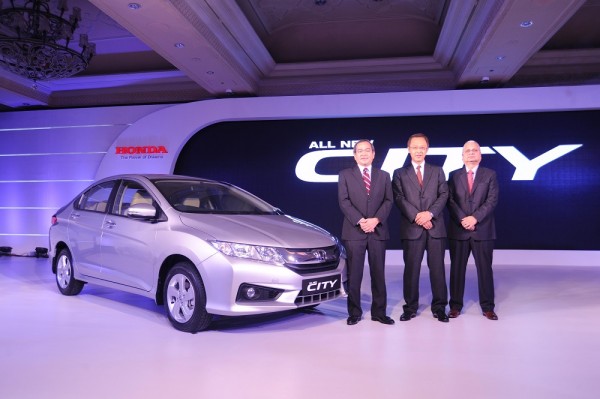 Honda Cars India announced the launch of the all-new 4th Generation City for the Indian market. The City has been the face of Honda in India since it first made its debut in 1998 and has sold over 4.3 lakhs making it one of the most successful sedans in the C segment.

The new City was unveiled in the Indian market on 25th November 2013. The all-new City, developed a s a global sedan is now available in both Diesel and Petrol fuel options.

The Diesel City is powered by the 1.5L i-DTEC diesel engine of Earth Dream Technology series which also does duty on the Amaze sedan and delivers 26kmpl making the City country’s most fuel efficient car. This engine delivers a maximum power of 100ps@3600 rpm and maximum torque of 200 N-m@1750 rpm and is mated to a developed 6-speed manual transmission.

The car has received an impressive response on pre-launch bookings clocking 9000 plus and will sold through 159 dealers in 101 cities across the country. Honda has launched only the diesel variant and the deliveries for the Petrol variants would begin from February 2014.

The new Honda City has been developed at Honda R&D Centre located in Tochigi, Japan following extensive market surveys in India, ASEAN countries and other markets for people’s driving needs and lifestyles.

Key features of the new City

The all-new City is available in 5 grades offered in Petrol and Diesel variants – E, S, SV, V and VX with Manual Transmission. Additionally, the City will be available in CVT in SV & VX petrol grades.

The City has sold more than 2.2 million worldwide in 55 countries and the new generation hopes to continue to the same performance and will now be launched in more than 60 countries

Honda 2 wheelers will be organizing the Honda Rev Fest tomorrow (4th August) one of grandest motorcycle extravaganza event in India for the first time. Honda RevFest 2015 will be held simultaneously across 8 cities (New Delhi, […]