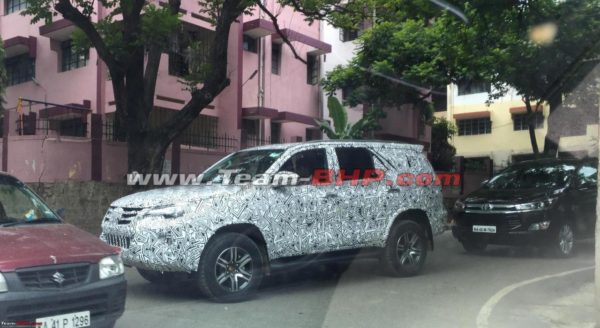 All New Gen Toyota Fortuner has been spotted testing in the Indian market. The SUV with heavy camouflage was seen for the first time in Bengaluru which also has the TKM headquarters.

The new Gen Fortuner made its international debut in 2015 and the India launch was expected early in the year. However Toyota chose to focus on the Innova for this year.

Toyota Fortuner was imported in India in 2015 for R&D and localisation of parts and shares many of its components with new Innova Crysta.

The new Fortuner gets a complete make over and looks a lot radical compared to the outgoing model.

The New Gen Toyota Fortuner is with a long list of equipment similar to the Innova such as Bi-Beam LED Projector Headlight, Auto Light Control System with Follow-me-home, Light Guiding Rear Lamps, Electrically with jam-protection Tail gate and lots of chrome elements on the exterior.

Engine options include two diesel engines: a 2.4-litre and a 2.8-litre, and a petrol motor of 2.7-litre capacity could be considered to avoid diesel bans in states like Delhi NCR and Kerala.

Transmission options include a 6-speed manual and a 6-speed automatic transmission. The top-end 2.8-litre variant will likely get the All-Wheel Drive setup, while the entry-level variants will come with rear wheel drive.

The Fortuner will be priced a lot more than the current model with prices starting from Rs. 25 lakhs for the base and going upto Rs. 35 lakhs for the top 4×4 Automatic.