New Audi A4 launched with 1.4 TFSI petrol engine only, diesel to follow soon.

German luxury car manufacturer, Audi launched the new Audi A4 in the Indian market. Based on an all-new platform the new gen A4 comes with more technical finesse, comfort and convenience features which makes the sedan in par with today’s competition.

The A4 built on the new platform is lighter by 95 kilograms than its predecessor thanks to the intelligent material mix and is powered by a new 1.4 TFSI motor. The new Audi A4 is priced at INR 38,10,000 onwards ex-showroom New Delhi and Maharashtra.

Seems like petrol is taking over diesel and Audi has launched the new A4 very efficient 1.4L TFSI four cylinder engine. The compact four cylinder unit comes with a more advanced start-stop system has a displacement of 1,395 cc and generates an output of 150 hp with best in class fuel consumption of 17.84 kmpl. The new A4 accelerates from 0 to 100 km/h in just 8.5 seconds with a top speed of 210 km/h.

The powertrain and the chassis have been completely redeveloped and now comes with a new 7 Speed S tronic transmission which features a fuel-saving freewheeling function called “Coasting Mode”.

A second after the TT coupe the A4 is equipped with fully digital dashboard, the Audi Virtual Cockpit. The driver focused instrument cluster provides every information directly in front of the driver- from navigation arrows to dynamic animations and infotainment.

The car measure 4730 mm in length and has a wheelbase of 2820 mm. Aerofynamics have been improved and the car has a drag coefficient to the best in class figure of 0.25. 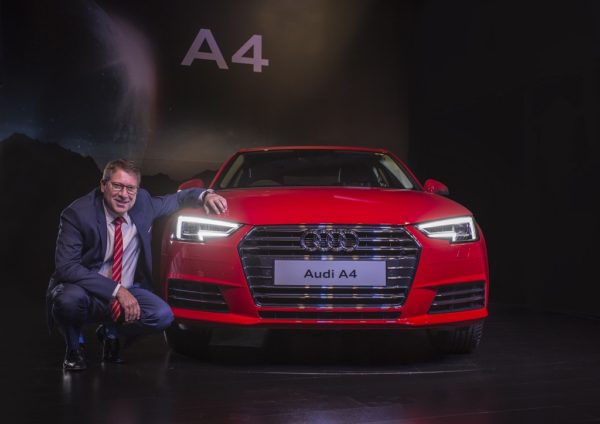 A prominent horizontal line on the front and rear emphasizes the car’s width. The flowing design with concise lines communicates the sporty elegance of the brand. The Single frame grille is wide and low; the available LED headlights and rear dynamic turn indicators make technology a visual trademark.

The all-new Audi A4 offers a more intuitive MMI display and control concept. Technological highlights include the Audi smartphone interface and the Audi phone box with wireless charging.

The MMI control concept in the center console is also a newly designed feature and acts as the main control element. The top-end infotainment system, MMI Navigation plus with MMI touch and a large 21 centimeter monitor, has a touchpad in the rotary controller to zoom in and out and to enter characters.

The entire MMI control logic is similar to that of a smartphone and includes an intelligent free-text search function. The new, more natural, voice-control system also understands input in normal everyday language. The MMI control concept also has eight freely programmable favorite buttons to activate various features with a touch of a button.

MMI Navigation plus is backed by the computing power of the second-generation modular infotainment platform, which allows Audi to bring consumer electronics innovations into the vehicle quickly.

The Audi smartphone interface is a new feature. It integrates iOS and Android mobile phones into an environment developed especially for this purpose – Audi MMI.

The Audi phone box connects smartphones to the on-board antenna and charges them inductively according to the Qi standard.

Another function is the Audi smartphone interface – it brings Apple Car Play and Android Auto on board. When the customer plugs an iOS or Android smartphone into the USB port (iOS 7.1 and up, To stay updated on the Audi India press activities, download the Audi media app Android 5.0 Lollipop and up), smartphone contents such as navigation, telephone, music and selected third-party apps can be accessed in a separate MMI menu. The contents can be easily used via MMI or voice control.

The handling of all-new Audi A4 makes a great leap forward. The sedan comes with dynamic handling and first-class ride comfort while also reducing fuel consumption. The all-new Audi A4 comes with the Audi Drive Select with four driving modes- Auto, Comfort, Individual and Dynamic.

The new A4 will compete with the likes of Mercedes-Benz C-Class, BMW 3 Series, Jaguar XE and Volvo S60.

Audi drives into Ranchi – opens its first-ever showroom in Jharkhand

“Audi is the undisputed No.1 luxury car brand in India. We look forward to command a leadership position in the state of Jharkhand as well and Audi Ranchi will accelerate our expansion into eastern part […]

Audi to launch A4 diesel in February 2017

German luxury car maker Audi will be launching the diesel variant of the A4 sedan in February. The company had initially launched the petrol version only. Audi will strap the 2.0 TDI engine which is […]