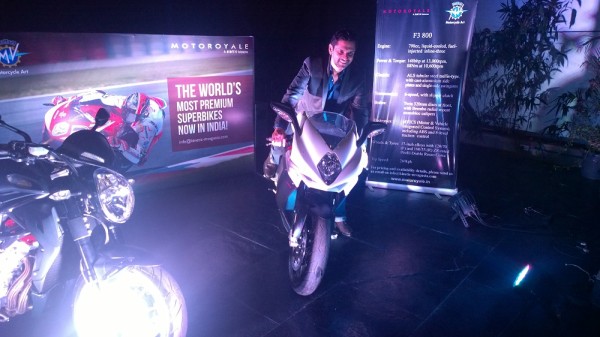 Iconic motorcycle brand MV Agusta from Italy which is brought to India by Kinetic Group’s superbike venture, “Motoroyale” unveiled the MV Agusta Brutale 1090 and MV Agusta F3 800 for the first time in Indian at blueFROG, Pune.

The event was graced by all major Pune-based motorcycling groups, comprising of more than 200 bikers and superbike enthusiasts. 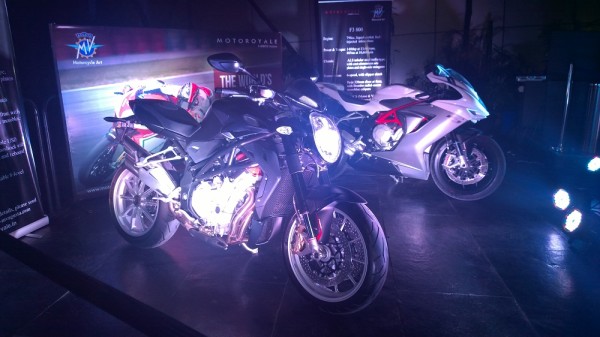 The MV Agusta Brutale 1090, which was originally designed by the legendary Italian motorcycle designer, Massimo Tamburini, is powered by a 1078cc four-cylinder engine that produces 144 horsepower and  112Nm of torque, with a top speed of 265kph. The bike comes with advanced electronics, including 8-stage traction control and ABS. Introductory ex-showroom (Pune) prices for the Brutale 1090 start at Rs. 17.99 lakh, and delivery period for the bike is 2-3 weeks.

The MV Agusta F3 800, which has been hailed as one of the best looking superbikes in the world, is powered by a 798cc three-cylinder engine, which produces an impressive 148 horsepower. Top speed is an equally impressive 269kph and the bike comes equipped with 8-stage traction control and anti-lock brakes (ABS).  Pricing for the bike will be announced closer to its launch in India, which is scheduled for early-2016.

The Kinetic Group has an exclusive partnership with MV Agusta for the Indian market, and will be providing spares, service and aftersales support for MV Agusta customers in India. The Kinetic Group will set up a chain of superbike showrooms, titled ‘Motoroyale,’ in major metro cities across India, for the retail of high-end superbikes.

Motoroyale by Kinetic today launched the MV Agusta Brutale 800 naked sports-bike in India. Priced at Rs.15.59 lakh, this is a completely redesigned motorcycle that delivers better performance and is more stylish than ever before. […]

Motoroyale by Kinetic, India’s first multi brand super bike manufacturer today announced the launch of an exclusive multi-brand, state-of-the-art showroom for five international super bike brands, in Thane. It will be a one-stop shop for […]

Motoroyale, Kinetic group’s venture of multi-brand superbikes announced the launch of the limited edition Norton Dominator and Commando, made exclusively for the Indian market. Only 37 of these limited edition models will be available, with just 18 […]