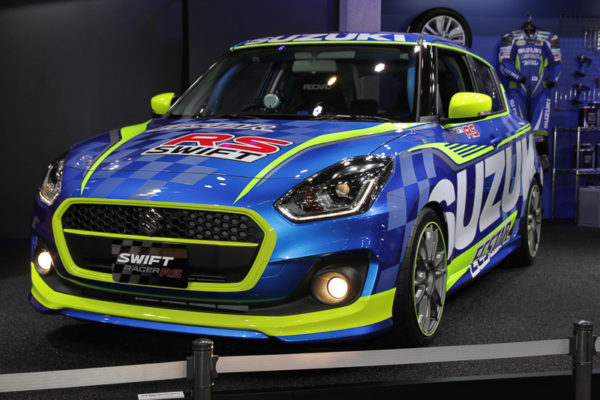 Suzuki has showcased the Swift Racer RS at the 2017 Tokyo Auto Salon which is inspired from Suzuki 2 Wheeler MotoGP.

The Swift Racer RS concept is based on the new Generation Swift which was unveiled in Japan in December 2016 and features Triton Blue livery of “Team SUZUKI ECSTAR” from MotoGP.

The Racer RS is based on the standard Swift which is equipped with a K12C 1.2-litre DUALJET VVT four-cylinder petrol and K10C 1.0-litre BOOSTERJET VVT three-cylinder petrol

Suzuki has also showcased the Ignis Motocrosser Style which is inspired from the Suzuki 2 wheeler MotoCross motorcycle.

The new Swift will go on sale by February-March 2016 and will be launched in the Indian market around October 2017.

India’s largest car maker, Maruti Suzuki has introduced a new limited edition of the Swift labeled as Windsong edition. The Swift Windsong edition is available on the VXi petrol & VDi diesel variants only which […]