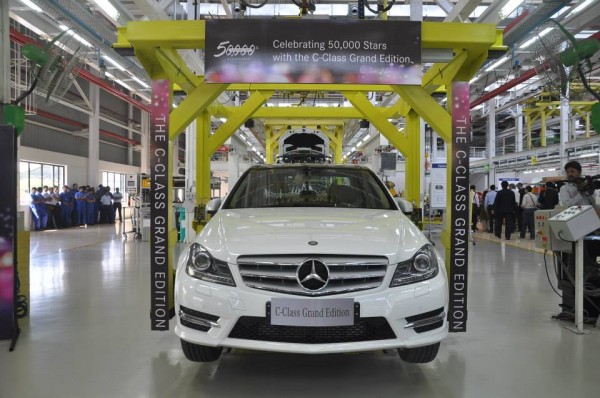 Mercedes-Benz India celebrated the roll-out of the 50,000th car from its manufacturing plant in Chakan, Pune and also launched the C-Class Grand Edition. The German luxury car make is the only premium car maker to have manufactured 50,000 cars on Indian soil.

Mercedes-Benz was the first company to set foot in the Indian auto market and started assembling cars at Tata Motor’s Chakan facility which is now being used to assemble Jaguar & Land Rover models.

The company has also completed 20 years and has invested upto 850 crores in India so far. The production line currently assembles five models: C-Class, the E-Class, the S-Class, ML-Class and GL-Class. By end Q1 2014, Mercedes-Benz plans to double capacity to make room for the company’s new future models which are most likely the A-Class, B-Class, CLA-Class and GLA-Class.

The C-Class Grand Edition is launched in both petrol & diesel models and 19,000 units have sold till date making it the bestselling model. 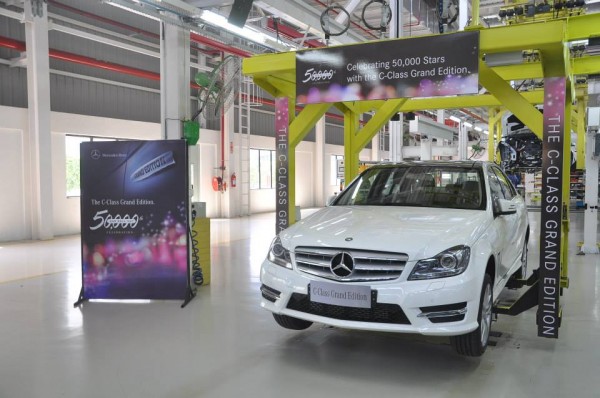 Established in 1994, Mercedes-Benz India has a world class production facility spread over 100 acres in Chakan, comprising an independent assembly facility for passenger cars and a technologically advanced Paint Shop. The German luxury car maker has a total of 61 outlets located in 34 Indian cities.

Mercedes-Benz India unveils their strategy for 2014, to launch 10 models

Mercedes-Benz India is working towards to regain the number one pole position and the company has announced their strategy for 2014. 2013 marked the ‘Year of Offensive’, which saw the company launch fascinating products, expand […]

Mercedes-Benz drives in fascination to Kanpur with a world class showroom; continues to expand the densest luxury network in the country

Mercedes-Benz drives in fascination to Kanpur with a world class showroom; continues to expand the densest luxury network in the country. Strategic network expansion reaching out to newer markets and customers Densest network presence: 67 […]