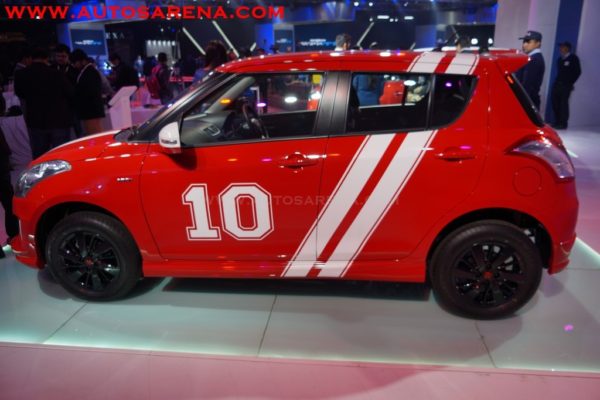 Swift Deca edition to gets sporty graphics and more equipment.

At the 2016 Auto Expo, India’s largest car maker Maruti Suzuki displayed a special limited edition Swift with a host of cosmetic changes on the exterior and interior as well.

The Car maker has decided to put the limited edition Swift into production and released a teaser that surfaced on the web where a Key fob which holds a keychain with ‘Deca’ embedded on it has been teased indicating that it will be based on the top end ZXI trim only.

The Car displayed at the 2016 Auto Expo was finished off in a bright red paint job, along with two white strips which run along the cars bonnet, roof, doors and boot along with number 10 either side of front passenger door, apart from the stickers and paint strips; the car also gets a body kit consisting of side skirts, roof spoiler, blacked out A and B pillars and Black alloys with Red Suzuki logo.

The interior too has benefited from an all black treatment with red accents on the dashboard, door trim and floor mats, while red and black contrast stitching takes pride on the gearstick, steering wheel and seats with the number 10 adds to the sporty feeling.

A touch screen infotainment system takes centre stage on the centre console and Maruti is also believed to be working on features that will be exclusive only on the Swift Deca limited edition.

Mechanicals will remain unaltered and the car will continue to be powered by the same 1.2 litre petrol and 1.3 litre diesel engines mated to a 5 speed manual gearbox.

Maruti Suzuki will launch the special edition Swift soon and will be the last upgrade done to the current gen Swift, with the new Swift taking centre stage and beginning sales next month internationally.

The new Swift will be launched in 2017 and Maruti could launch the new Dzire ahead of the hatch variant.

Maruti Suzuki will extend the AMT technology to the best seller Wagon R with launch most likely to happen in November. The Celerio was the first car to be equipped with AMT automatic gear box […]

Maruti Suzuki has been launching a slew of products this festive season. Maruti introduced the S-Cross, Ciaz SHVS hybrid a month back, recently introduced the refreshed Ertiga and a number of limited editions. The company […]