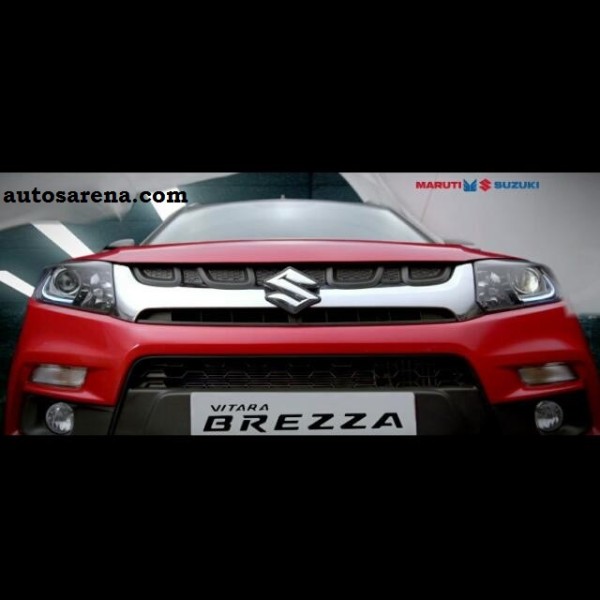 India’s largest car maker Maruti Suzuki is all set to launch the new Vitara Brezza Compact SUV in the Indian market at the 2016 Auto Expo. The company has already started teaser ads of the compact SUV on social media.

We have managed to get an image of the front facia and also a teaser video of the Vitara Brezza SUV.

The Maruti Vitara Brezza has been designed and developed completely by the Indian arm with only inputs from the parent company Suzuki. The name Vitara Brezza comes in part from Suzuki’s global SUV, the Vitara, while ‘Brezza’ is Italian for ‘fresh breeze’.

The Vitara Brezza looks quite stunning from the front and has Creta like propositions. The SUV does have and a decent road presence and we can expect the Vitara Brezza to break into the top 10 sales very soon.

Maruti has been very aggressive in terms of styling and will also offer the SUV with white and Black contrast roof. The front styling is similar to the Vitara concept and features a single slat chrome grille, muscular front bumper and projector headlamps with DRLs.

The Maruti Suzuki Vitara Brezza will be powered by the 1.2-liter K-Series petrol engine the same available on the Swift and Baleno, and the 1.3-liter DDiS diesel engine when launched. Most likely the 90 Ps diesel engine could be used. Both engines will sport a front-wheel drive arrangement with a 5-speed manual gearbox. It’s unlikely for Maruti to offer an automatic now, but may come in the future if demand does exist.

July is going to witness a plethora of launches.  To start with we will have the Tata Motors Bolt & Zest, followed by Volkswagen Polo and Nissan Sunny facelift. How can India’s largest car maker […]