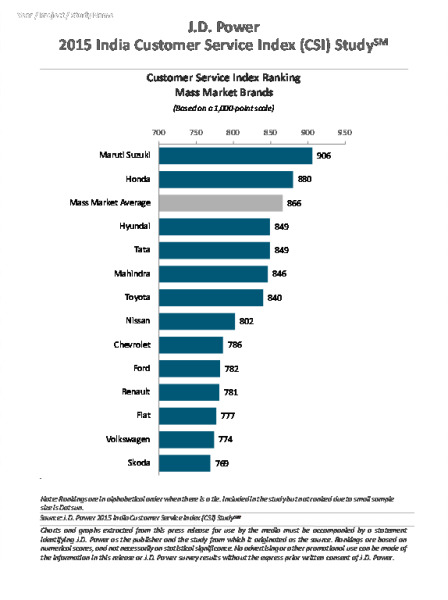 According to J.D. Power rigorous implementation of processes, faster vehicle turnaround and enhanced customer facilities at service workshops by auto manufacturers have resulted in an increase in satisfaction with after-sales service, according to the J.D. Power 2015 India Customer Service Index (CSI) Study—Mass Market.

J.D. Power has been conducting this study in India for the last 19 years and examines satisfaction among vehicle owners who visit an authorized dealership service center for maintenance or repair work between the first 12 to 24 months of vehicle ownership.

Maruti Suzuki ranks highest in after-sales customer service among mass market brands with a score of 906 while Honda ranked second with 880 points and is the most improved nameplate in the study. Hyundai ranked 3 while surprisingly Tata Motors has ranked 4. The Germans are known for bad after sales and the score just validates that.

Some of the key findings from the study are

The year 2015 will be remembered as the year of the ‘Three Pointed Star’ in the chronicles of the automotive world. Not only did Mercedes-Benz win a host of prestigious awards worldwide across various categories, […]