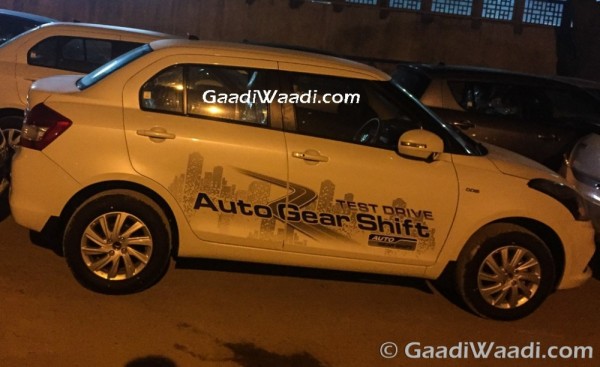 Maruti Suzuki has confirmed the AMT technology to be available in more cars in the future at the launch of Celerio automatic in 2014. The company has already offered this technology in Alto K10 and recently launched Wagon R. The next model to receive this technology is the popular and largest selling sedan the Swift Dzire.

The company has been testing the car for some time and now a test drive car of the automated manual transmission (AMT) version has been spotted. The demo car with graphics indicates the launch in very soon.

The demo car spotted is a a ZDi (top-end diesel) variant with AMT technology making it the second model after Zest to offer Automatic technology with diesel engine and a first for Maruti Suzuki.

There are no other changes except for the AMT transmission and will be equipped with all the features available on the standard ZDi trim. The AMT gear box is sourced from Magneti Marelli which has set-up a plant to cater to the huge demand for the AMT technology. There are no changes to the engine and the car will continue to be powered by the same 1.3 diesel engine sourced from FIAT which makes 75 Ps of maximum power at 4000rpm and 190Nm of peak torque at 2,000rpm.

When launched the Maruti Suzuki Dzire automatic will compete with the Tata Zest. Other compact sedans available in the market are Ford Figo Aspire, Hyundai Xcent and Honda Amaze. VW is soon going to launch their compact sedan with company unveiling at the 2016 Auto expo.

We could expect Maruti Suzuki to also offer the Swift with AMT gear box next year. The question remain will Maruti Suzuki discontinue the petrol Automatic? We expect it may not.